Lois Duncan Steinmetz (April 28, 1934 – June 15, 2016), known as Lois Duncan, was an American writer of children's books. She was best known for young-adult novels of suspense. She wrote two early novels under the pen name Lois Kerry.

Duncan won the 1992 Margaret Edwards Award from the American Library Association for her contribution in writing for teens.

Duncan had three children with her first husband, Joseph Cardozo: daughters Robin and Kerry, and son Brett. Her first marriage ended in divorce in 1962. In 1965, she married Donald Arquette, an electrical engineer; they had two children: son Donald, Jr., and daughter Kaitlyn (d. 1989). Her three oldest children all took her second husband's name.

In 1989, the youngest of Duncan's children, Kaitlyn Arquette, was murdered in Albuquerque, New Mexico. Who Killed My Daughter? relates fact and conjecture about the still-unsolved case. Duncan had said that her "dream is to write a sequel to Who Killed My Daughter? to give our family's true-life horror story a closure. Of course, for that to be possible, Kait's case must be solved." After Kait's death, Duncan began writing children's picture books, saying that she could no longer write about young women in life-threatening situations.

On June 15, 2016, at the age of 82, Duncan died at home in South Sarasota, Florida from complications of a stroke. 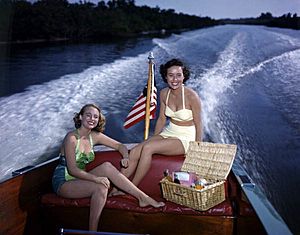 All content from Kiddle encyclopedia articles (including the article images and facts) can be freely used under Attribution-ShareAlike license, unless stated otherwise. Cite this article:
Lois Duncan Facts for Kids. Kiddle Encyclopedia.