Loki is a fictional villain who appears in comic books by Marvel Comics. He has a range of superpowers, and is therefore called a "supervillain". His powers consist of shape-shifting and also some sorcery. He is based on the god Loki from Norse mythology. The character first appeared historically in Venus No. 6 (August 1949). The character was created by Stan Lee, Larry Lieber and Jack Kirby. 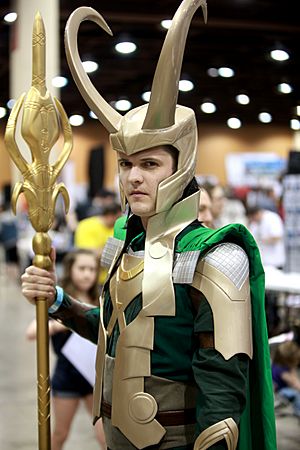 Loki is the brother and enemy of Thor. In the Marvel Cinematic Universe, Loki is featured in the movies Thor, The Avengers and Thor: The Dark World. The character Loki is played by Tom Hiddleston. In the movies, Loki is said to be Thor's brother (therefore Odin's son), only to discover he was adopted and is in fact a Jötunn and son of King Laufey, ruler of Jötunheim.

All content from Kiddle encyclopedia articles (including the article images and facts) can be freely used under Attribution-ShareAlike license, unless stated otherwise. Cite this article:
Loki (comics) Facts for Kids. Kiddle Encyclopedia.