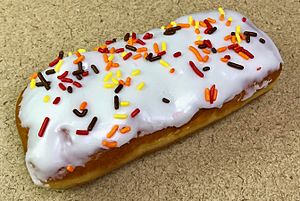 A Long John with sprinkles from Minnesota 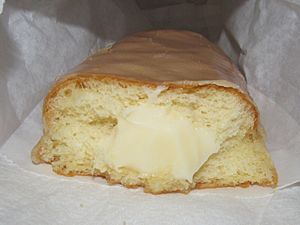 The Long John is a bar-shaped, yeast risen pastry like a doughnut either coated entirely with glaze or top-coated with cake icing. They may be filled with custard or creme. The term Long John is used in the Midwestern U.S. and Canada.

In other parts of the United States, such as the Mid-Atlantic, Long Johns are sometimes marketed as "éclairs"; the two pastries look similar but are created with different types of dough (steam-puffed vs. yeast-risen) and sometimes different fillings (the éclair may have chiboust cream). The éclair has (usually chocolate) fondant icing.

Some parts of the American Midwest also call this type of pastry a cream stick when filled.

All content from Kiddle encyclopedia articles (including the article images and facts) can be freely used under Attribution-ShareAlike license, unless stated otherwise. Cite this article:
Long John (doughnut) Facts for Kids. Kiddle Encyclopedia.