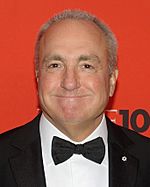 Lorne Michaels (born November 17, 1944) is the creator of Saturday Night Live. He has also produced movies. Michaels was born in Toronto. He moved to Los Angeles in 1968. He is the executive producer of The Tonight Show as well as Late Night with Seth Meyers. Michaels was given an Honorary Doctorate from Ryerson University in 1999.

All content from Kiddle encyclopedia articles (including the article images and facts) can be freely used under Attribution-ShareAlike license, unless stated otherwise. Cite this article:
Lorne Michaels Facts for Kids. Kiddle Encyclopedia.