Love Is an Open Door facts for kids

Kids Encyclopedia Facts
This page is about the Frozen song. For The Fuzz song, see Like an Open Door.

"Love Is an Open Door" is a song written by Kristen Anderson-Lopez and Robert Lopez for Walt Disney Animation Studios's 53rd animated feature film Frozen (2013). Performed by Kristen Bell and Santino Fontana as Anna and Prince Hans respectively, "Love Is an Open Door" is a romantic duet which takes place during the first act of the film, when Anna meets Hans during the reception of her sister Elsa's coronation. The song was intended by Lopez and Anderson-Lopez to "feel like the perfect first date", inspired by the date depicted in the film The Karate Kid (1984).

The notion of a song that doubled up as a romantic duet and the villain song came to fruition after the writers decided to turn Elsa into a tragic hero rather than a villain, leaving the door open for Hans to become the villain of the film. The first song written for the film, "You're You", was cut from the film, due to Hans interrupting Anna in the song, an act which would have lessened Hans's reveal as a villain later in the film. "Love Is an Open Door" was eventually also recorded by Demi Lovato, but never released.

The song is inspired by the date depicted in the film The Karate Kid (1984), and it is "intended to feel like the perfect first date", according to the songwriters. The line about finishing "each other's sandwiches" originally had nothing to do with the television show Arrested Development. Anderson-Lopez explained she was eating a sandwich at the time she wrote the line, but had not seen the show, and it was not until Lopez's brother pointed out the connection that they realized audience members might hear it as an Arrested Development reference. They tried pitching a couple of alternate versions to Disney, but the line about sandwiches stayed in.

The song is written as an apparent love duet sung by Princess Anna of Arendelle with Prince Hans of the Southern Isles. Anna opens the song by explaining to Hans her loneliness by being shut out from Elsa for years, with Hans promising to never shut her out. As the night goes on, the two gradually find themselves sharing a lot in common, and towards the end of the night, Hans proposes to Anna, and she accepts.

In the Broadway musical version of Frozen, "Love is an Open Door" is extended, adding a dance sequence right where the original would end with Hans and Anna interacting with each other. A slightly extended reprise of the second chorus then occurs after Hans proposes to Anna. 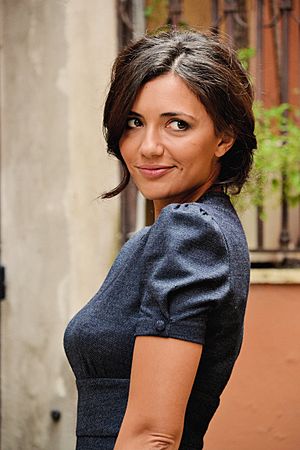 Several other language versions of the song have also been successful. The Japanese-language version called "Tobira Akete" (とびら開けて, "Open the Door") was sung by Sayaka Kanda and Eisuke Tsuda. It appeared on the Billboard Japan Hot 100 in May 2014, peaking at number 36. After five months, the song was certified gold for 100,000 downloads by the RIAJ. The Korean language version, sung by Park Ji-yoon and Yun Seong-guk, reached 131 on the Gaon Singles Chart, being downloaded 14,000 times.

The Italian version, along with the whole Italian adaptation of the movie, was awarded best foreign dubbing worldwide.

Since 2013, some local TV stations have been dubbing the movie in their local languages, creating some unofficial versions. Namely: Abkhaz, Albanian, Arabic, Kabardian, Karachay-Balkar, Persian and Tagalog.

All content from Kiddle encyclopedia articles (including the article images and facts) can be freely used under Attribution-ShareAlike license, unless stated otherwise. Cite this article:
Love Is an Open Door Facts for Kids. Kiddle Encyclopedia.