Lovingston is a census-designated place (CDP) in and the county seat of Nelson County, Virginia, United States. The population as of the 2010 Census was 520. Its ZIP Code is 22949. It was among the communities severely affected by flash flooding from Hurricane Camille in 1969.

Lovingston is part of the Charlottesville Metropolitan Statistical Area.

The Lovingston High School, Lovingston Historic District, and the Nelson County Courthouse are listed on the National Register of Historic Places.

The town was formed in 1807 and has been the county seat of Nelson County since 1809 when the courthouse was built in the center of town. The original 30-acre parcel of land on which the town sits was given by the Loving family, a very influential family over the years of the town’s history. The town is dominated by the courthouse in the center of town with a grid pattern of streets surrounding it. Front, Second and Spring streets (which is now Route 29) run in a north-south direction while Main and Pleasant streets run in an east-west direction. The layout of the town was designed by George W. Varnum and the original design is still present today with very few alterations.

The courthouse is a significant marker of Lovingston’s history as a courthouse town. It was the first public building built after the town’s formation in 1807, and expansions have enabled it to remain in use to the present. Notable buildings in the square include the Whitehead Law office, the First Clerk’s office, and the original jail that was based on a design from Thomas Jefferson.

Along Court Street were several taverns and hotels where people would gather to dine and rest on court days. Court days were a weekly event that would bring people from all over the county. The entire square would be filled with court attendees and their families picnicking and socializing.

The courthouse was designed by Shelton Crosthwait and is derived from the English town hall plan featuring a two-story temple front with a ground floor arcaded piazza. This design bridges the gap between colonial courthouse design and the Jeffersonian temple form. 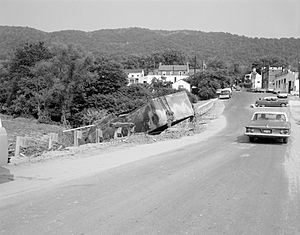 Damage from Hurricane Camille on the outskirts of Lovingston

The hurricane of 1969 was a profound event that has had a lasting impact on Lovingston. Dr. Robert H. Simpson at the National Hurricane Center called Hurricane Camille “the greatest recorded storm ever to hit a heavily populated area of the Western hemisphere.” Thirty-three inches of measured rain fell in a short period of five hours in town, the day prior five inches in a half-hour and 153 Virginians were killed, three of whom lived in Lovingston, and some still missing. Many buildings were destroyed (207) and 70 additional ones damaged. Fortunately the town was sited to avoid heavy flooding; however, the surrounding areas were more severely damaged, including the communities of Massie’s Mill, Roseland, Bryant, and many others. Lovingston served as the center of rescue and recovery operations after the storm. 185 miles of road were severely damaged or lost in the flood.

The town has been recognized on the Virginia Landmarks Register and the National Register of Historic Places since 2005 with 134 contributing buildings and sites within 225-acre designated historic area. Architectural styles present include Federal, Greek Revival, Gothic Revival, Italianate, Colonial Revival, Dutch Colonial Revival, Craftsman, and Modern Movements, as well as commercial and governmental buildings.

Lovingston is located in Nelson County in the center of the Commonwealth of Virginia along U.S. 29 just west of Peebles Mountain. The village has a total area of 4.03 square miles (10.44 km2), all of it land.

Lovingston has a four-season humid subtropical climate, with all months being well-watered, though the period from May to September is the wettest. Winters are somewhat cool, with a January average of 34.5 °F (1.4 °C). Spring and autumn provide transitions of reasonable length. Summers are hot and humid, with July averaging 75.6 °F(24.2 °C). Snowfall is highly variable from year to year but is normally light and does not remain on the ground for long, averaging 17.1 inches (43.4 cm).

The white building at 622 Front Street was established as a livery and inn for travelers on the Stage Road in the early 1800s. The lower section has been altered to accommodate for retail space in the 1930s, but there were once stables where guests would keep their horses on the street level. During the American Civil War, the Inn was occupied by Confederate Soldiers and used as a hospital for soldiers wounded in nearby battles. The apartments on the second level have been home to several individual tenants and families, to present day, including the pastors of Lovingstons’s four Baptist churches and their families during the early 1900s. The property is best known as the home to the local pharmacy, which was opened by Dr. E.B. Rowan in 1932 and was later managed by Dr. Joseph Kilmartin. Doctor Kilmartin’s Pharmacy was a popular place for residents of Lovingston to spend time as it boasted some of the best milk shakes in Nelson County. Dr. Kilmartin retired in 1971, but the drug store remained open until 1980.

The Orchard House was built in 1874 as the second home of Judge John D. Horsley, who served at the Courthouse. His son Thomas (Thos for short) M. Horsley took up residence here, making a successful orchard business named Village View that overlooked Lovingston. After Thomas' untimely death, his sorrowful widow let the orchard fall into ruin. Suddenly she rolled up her sleeves and rescued it, eventually remarrying. The Orchard was operable until 1962. Richard and Deb Bulissa now own the house and run it as a quaint central Virginia bed and breakfast.

The vineyard owned by AI Weed, who was the second president of the Virginia Winery Association, was founded in 1973. It sits on 600 acres outside the historic district of Lovingston. Robert Lee Camden owned the property from 1910 to 1935. The land was used for the apple, corn, tobacco, and cattle businesses. The original buildings in the vineyard were built around 1860 and are still in use for storage. Clarence T. Wright, nephew of R. L. Camden and a local mail carrier, inherited the property in 1935 and died in 1968.

Lovingston was once home to Nelson County’s only movie theater, Nelson Hall, which was moved to Front Street from the nearby Oak Ridge estate in the 1920s. Manager J. H. McClellan bought the theater in 1945, and added a brick lobby with upstairs apartment to the front of the original two-story wooden structure shortly after. The theater seats 300 on the first level, and 99 in a balcony accessed by a separate entrance on the south side; during segregation, African American patrons could sit in the balcony only.

At its peak, the theater showed one movie on weeknights, two on Saturday nights, and a matinée and two evening shows on Sunday. On Thursday nights, the film was preceded by a live stage show, often local musicians or travelling Vaudeville shows. McClellan managed the theater until 1970, and Nelson Hall closed in 1973. The building has since been intermittently used as a performance space and church.

Bright Hope Baptist Church is Lovingston's most historic African-American landmark. Located on a prominent site overlooking the village from the west, the church and a school (no longer standing) were built by the American Missionary Association around 1870 to serve the freedmen and women of Nelson County. The church cemetery has over 100 marked graves in the kept area.

A small number of celebrities were born in or near Lovingston. These individuals have helped put Lovingston on the map.

All content from Kiddle encyclopedia articles (including the article images and facts) can be freely used under Attribution-ShareAlike license, unless stated otherwise. Cite this article:
Lovingston, Virginia Facts for Kids. Kiddle Encyclopedia.