The Lower East Side Tenement Museum, located at 97 and 103 Orchard Street in the Lower East Side neighborhood of Manhattan, New York City, is a National Historic Site. The Museum's two historical tenement buildings were home to an estimated 15,000 people, from over 20 nations, between 1863 and 2011. The museum, which includes a visitors' center, promotes tolerance and historical perspective on the immigrant experience.

The building at 97 Orchard Street was contracted by Prussian-born immigrant Lukas Glockner in 1863 and was modified several times to conform with the city's developing housing laws. When first constructed, it contained 22 apartments and a basement level saloon. Over time, four stoop-level and two basement apartments were converted into commercial retail space, leaving 16 apartments in the building. Modifications over the years included the installation of indoor plumbing (cold running water, two toilets per floor), an air shaft, and gas followed by electricity. In 1935, rather than continuing to modify the building, the landlord evicted the residents, boarded the upper windows, and sealed the upper floors, leaving only the stoop-level and basement storefronts open for business. No further changes were made until the Lower East Side Tenement Museum became involved with the building in 1988. As such, the building stands as a kind of time capsule, reflecting 19th and early 20th century living conditions and the changing notions of what constitutes acceptable housing. In spite of the restoration, some parts of the upper floors are unstable and remain closed. 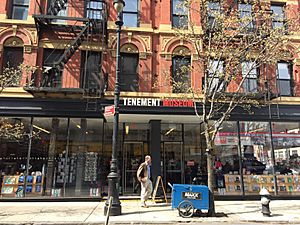 The Tenement Museum was founded in 1988 by Ruth J. Abram and Anita Jacobson. The Museum's first key property, the tenement at 97 Orchard Street, was designated a National Historic Landmark on April 19, 1994. The National Historic Site was authorized on November 12, 1998. It is an affiliated area of the National Park Service but is owned and administered by the Lower East Side Tenement Museum. The site received a Save America's Treasures matching grant for $250,000 in 2000 for preservation work. In 2001 the museum was awarded the Rudy Bruner Award for Urban Excellence silver medal. In 2005, the museum was among 406 New York City arts and social service institutions to receive part of a $20 million grant from the Carnegie Corporation, which was made possible through a donation by New York City mayor Michael Bloomberg. The National Defense Authorization Act for the 2015 fiscal year expanded the National Historic Site designation to also include the tenement at 103 Orchard Street.

The Tenement Museum attracted some negative press in 2007 related to its employees seeking union membership as well as for its planned acquisition of the building at 99 Orchard Street through eminent domain in 2002.

The museum's exhibits and programs include restored apartments and shops open daily for public tours, depicting the lives of immigrants who lived at 97 Orchard Street between 1869 and 1935 and 103 Orchard Street from the 1950s to the 1980s. The museum also provides a documentary film and offers tours with costumed interpreters for portraying the building's former residents, tastings of their communities' typical foods, and neighborhood walks. The museum's tours place the immigrants' lives in the broader context of American history. The museum also has an extensive collection of historical archives and provides a variety of educational programs.

All content from Kiddle encyclopedia articles (including the article images and facts) can be freely used under Attribution-ShareAlike license, unless stated otherwise. Cite this article:
Lower East Side Tenement Museum Facts for Kids. Kiddle Encyclopedia.