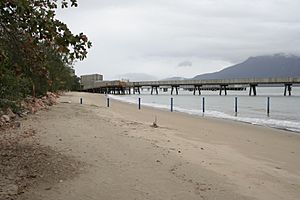 Lucinda is a coastal town in the state of Queensland, Australia, located at the southern entrance to Hinchinbrook Channel near the town of Ingham. A sugar-exporting town, Lucinda is noted for its 6 km-long sugar jetty, the world's largest bulk sugar loading facility. At the 2006 census, Lucinda had a population of 448.

Lucinda is located in the Hinchinbrook Shire local government area.

Lucinda is also used as a port for a supply barge to Palm Island.

All content from Kiddle encyclopedia articles (including the article images and facts) can be freely used under Attribution-ShareAlike license, unless stated otherwise. Cite this article:
Lucinda, Queensland Facts for Kids. Kiddle Encyclopedia.