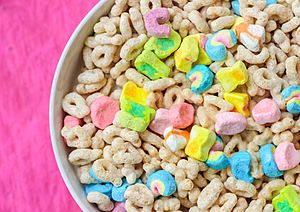 Lucky Charms is a brand of cereal made by General Mills. The cereal first appeared in stores in 1964. Its two main ingredients are toasted oat pieces and colored marshmallows.

In 2005, another form of the cereal was made, Chocolate Charms. Then later being followed by Lucky Charm Treats. After these changes proved to increase sales, General Mills decided to make changes to the cereal periodically.

All content from Kiddle encyclopedia articles (including the article images and facts) can be freely used under Attribution-ShareAlike license, unless stated otherwise. Cite this article:
Lucky Charms Facts for Kids. Kiddle Encyclopedia.