Kids Encyclopedia Facts
For other places with the same name, see Ludlow (disambiguation). 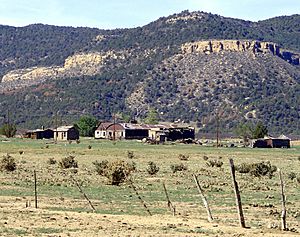 Ludlow is a ghost town in Las Animas County, Colorado, United States. It was famous as the site of the Ludlow Massacre in 1914. The town site is nestled at the entrance to a canyon in the foothills of the Sangre de Cristo Mountains. It is located along the western side of Interstate 25 approximately 12 miles (19 km) north of the town of Trinidad. Nearby points of interest include the Ludlow Monument, a monument to the coal miners and their families who were killed in the 1914 massacre, the Hastings coke ovens, and the Victor American Hastings Mine Disaster Monument.

Robert Adams made a series of photographs in Ludlow in 1981.

All content from Kiddle encyclopedia articles (including the article images and facts) can be freely used under Attribution-ShareAlike license, unless stated otherwise. Cite this article:
Ludlow, Colorado Facts for Kids. Kiddle Encyclopedia.