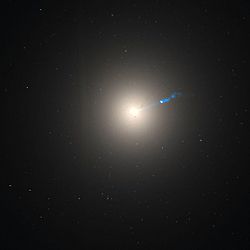 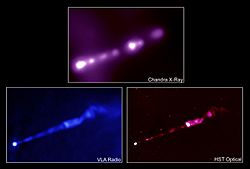 This is the jet stream of plasma from the active centre, viewed by various instruments.

Messier 87 (also known as M87, Virgo A or NGC 4486) is a supergiant elliptical galaxy. It was discovered in 1781 by the French astronomer Charles Messier, who catalogued it as a nebulous feature. The second brightest galaxy within the northern Virgo Cluster, it is about 16.4 million parsecs (53.5 million light-years) from Earth.

Unlike a disk-shaped spiral galaxy, Messier 87 has no distinctive dust lanes. It has an almost featureless, ellipsoidal shape. Luminosity diminishes with distance from the centre. At the core is a supermassive black hole. This is a strong source of multiwavelength radiation, particularly radio waves.

A jet of energetic plasma known as a blazar is thrown out by the black hole at near the speed of light. It goes outward at least 1,500 parsecs (5,000 light-years). In pictures taken by the Hubble Space Telescope in 1999, the motion of Messier 87's jet was measured at four to six times the speed of light. This motion is probably an optical illusion caused by the relativistic velocity of the jet.

The stars in this galaxy form about one sixth of Messier 87's mass. They are spread out symmetrically, but the density of stars decreases with distance from the core. The galactic envelope extends out to a radius of about 150 kpc (490 kly), where it stops—possibly cut off by an encounter with another galaxy. Between the stars is a diffuse interstellar medium of gas that has been chemically enriched by elements emitted from evolved stars.

Messier 87 is one of the most massive giant elliptical galaxies near Earth, and one of the brightest radio sources in the sky, It is a popular target for both amateur and professional astronomy study.

All content from Kiddle encyclopedia articles (including the article images and facts) can be freely used under Attribution-ShareAlike license, unless stated otherwise. Cite this article:
Messier 87 Facts for Kids. Kiddle Encyclopedia.