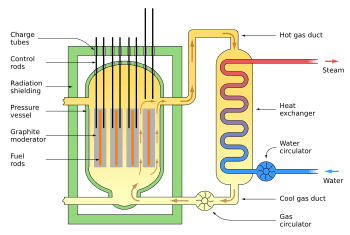 Magnox is a type of nuclear reactor designed to run on natural uranium. It uses graphite as a neutron moderator and carbon dioxide gas as a heat exchange coolant. The name Magnox comes from the magnesium-aluminium alloy used to clad the fuel rods inside the reactor. The Magnox was designed for producing both electric power and plutonium-239 for use in nuclear weapons.

All content from Kiddle encyclopedia articles (including the article images and facts) can be freely used under Attribution-ShareAlike license, unless stated otherwise. Cite this article:
Magnox Facts for Kids. Kiddle Encyclopedia.