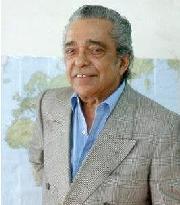 Mahdi Elmandjra (Arabic: مهدي المنجرة) (13 March 1933 – 13 June 2014) was a Moroccan futurist, economist, writer and sociologist. He was best known for his leadership roles with the United Nations Educational, Scientific and Cultural Organization (UNESCO).

Elmandjra was born in Rabat. He was educated in Morocco, the United States and the United Kingdom.

All content from Kiddle encyclopedia articles (including the article images and facts) can be freely used under Attribution-ShareAlike license, unless stated otherwise. Cite this article:
Mahdi Elmandjra Facts for Kids. Kiddle Encyclopedia.