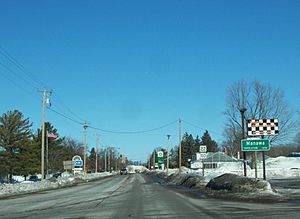 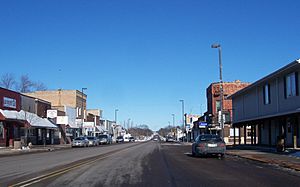 Looking north at downtown Manawa on WIS22 and WIS 110, this is located on Bridge Street also known as Main Street.

Manawa is a city in Waupaca County, Wisconsin, United States. The population was 1,441 at the 2020 census.

The area that developed into Manawa was sparsely settled before 1860 and most residents clustered in the area known as Little Wolf, Wisconsin. The city of Manawa grew up south of a sawmill built on the Little Wolf River in 1871 by J. M. and Harley Rounds and Robert Pugmire. The river was bridged in three places by the 1880s, making Manawa a focus of all traffic through the town. The timbered bridge at the sawmill was replaced with a steel truss bridge in 1902. About a mile downstream, the railroad crossed the river on a plate girder bridge, and barely a half-mile below the railroad trestle, the lower bridge, originally built of lumber, was replaced by a three-arch stone bridge in 1902.

The city was cradled in the lower crook of the reverse-S made by the river, with the streets of the city laid out in three distinct parts. A northern part in 16 blocks was drawn just south of the sawmill and became the central business district through most of the city's life. A central sliver of eight blocks, a mix of businesses and residences, lay on the south side of the railroad. And to the south, a square of 20 blocks was laid out around the river crossing about a half-mile below the railroad. Although this was the largest part of Manawa to be platted, and appeared to be laid out as the civic center of the city, complete with a town square, it fell into decline, and only in more modern times has begun to grow again.

For a short time after the post office opened in 1872, under the postmaster Elbert Scott, the city was known as Elberton. The name Manawa was adopted in 1874. According to local folklore, "Manawa" means "long bow," and was the name of a Native American killed in a duel near the lower river crossing.

There were 584 households, of which 30.1% had children under the age of 18 living with them, 41.4% were married couples living together, 12.7% had a female householder with no husband present, 4.6% had a male householder with no wife present, and 41.3% were non-families. 36.5% of all households were made up of individuals, and 15% had someone living alone who was 65 years of age or older. The average household size was 2.28 and the average family size was 2.97.

Manawa hosts an annual Midwestern Rodeo in July, which consists of a rodeo, Independence Day parade, and four rodeo performances.

The School District of Manawa, which serves the city of Manawa, at one time operated only rural schools. The district had one rural school for kindergarten in Symco. It was reorganized on October 25, 1982. It now consists of an elementary school and Little Wolf Junior-Senior High School (Grades 7-12.)

A school built on Depot Street in 1920 was added to and remodeled six times. In 1969, following a fire that destroyed part of that school, the Little Wolf High School was built. The school's mascot is a wolf.

Sports available in the schools include cross country, football, basketball, wrestling, volleyball, softball, baseball, track, bowling, and golf. Cheerleading is also available, but only for children in third through sixth grade. The pee-wee junior (black & black A), pee-wee (white), and Pop Warner (red) football team (3rd - 6th grade) is called the Manawa Cowboys, while the 7th through 12th grade football team is the Manawa "The Big Bad" Wolves (black and red). The school colors are red, black, and white.

All content from Kiddle encyclopedia articles (including the article images and facts) can be freely used under Attribution-ShareAlike license, unless stated otherwise. Cite this article:
Manawa, Wisconsin Facts for Kids. Kiddle Encyclopedia.