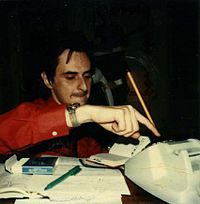 In 1972 he co-founded the Skydog record label, which issued its first release, the Flamin' Groovies' Grease 7" EP in May 1973. In August 1976, and again in 1977, Zermati organised the "first European punk rock festival" in the French town of Mont-de-Marsan.

He organised tours in France by bands including The Clash, Dr Feelgood, The Heartbreakers, and Eddie and the Hot Rods, as well as concerts by the Ramones and Talking Heads.

All content from Kiddle encyclopedia articles (including the article images and facts) can be freely used under Attribution-ShareAlike license, unless stated otherwise. Cite this article:
Marc Zermati Facts for Kids. Kiddle Encyclopedia.