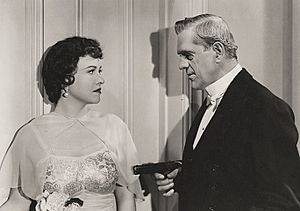 Margaret Lindsay (September 19, 1910 – May 9, 1981) was an American actress. She worked with Warner Bros. in the 1930s. Her movies included Fog over Frisco and Jezebel. She also acted in B movies during her career. Her most notable role was in The House of the Seven Gables in 1940.

Lindasy was born in Dubuque, Iowa. She died from emphysema in Los Angeles.

All content from Kiddle encyclopedia articles (including the article images and facts) can be freely used under Attribution-ShareAlike license, unless stated otherwise. Cite this article:
Margaret Lindsay Facts for Kids. Kiddle Encyclopedia.