Kids Encyclopedia Facts
Not to be confused with Marion County, Kentucky.

Marion is a home rule-class city in Crittenden County, Kentucky, in the United States. It is the seat of its county. As of the 2010 census, the city population was 3,039.

The farm communities surrounding Marion are home to a large Amish population. The Marion-Crittenden County Airport is located west of the city. 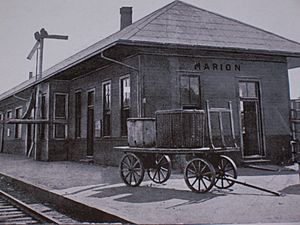 The city is named for Francis Marion, a brigadier general from South Carolina in the American Revolutionary War.

Marion was founded in 1842 on land donated by Dr. John S. Gilliam shortly after Crittenden County was created January 26, 1842, from a portion of Livingston County. The city was incorporated February 22, 1844, and a post office was established in 1846.

A railroad line from Blackford to Princeton was completed in 1887, and a depot was established at Marion. Originally owned by the Illinois Central Railroad, it has since been abandoned.

The internationally known Ben E. Clement Mineral Museum is located in Marion. Its collection of fluorite crystal specimens is significant, and a reflection of Crittenden County's importance in the history of fluorite mining.

Marion was home to the Marion Bobcats, a wood bat baseball team in the Ohio Valley Summer Collegiate Baseball League, from 2008 to 2013.

The Holiday Drive-In Theater was located east of Marion, and had a 200-car capacity. It has since been demolished.

The climate in this area is characterized by hot, humid summers and generally mild to cool winters. According to the Köppen Climate Classification system, Marion has a humid subtropical climate, abbreviated "Cfa" on climate maps.

All content from Kiddle encyclopedia articles (including the article images and facts) can be freely used under Attribution-ShareAlike license, unless stated otherwise. Cite this article:
Marion, Kentucky Facts for Kids. Kiddle Encyclopedia.