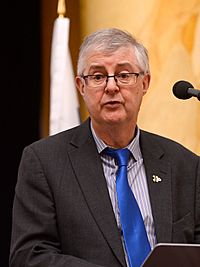 Mark Drakeford (born 19 September 1954) is a Welsh Labour politician. He has been First Minister of Wales and leader of the Welsh Labour Party since 2018. He served as Cabinet Secretary for Finance in the Jones Government from 2016 to 2018, Minister for Brexit from 2017 to 2018 and Minister for Health and Social Services from 2013 to 2016. Drakeford has been a member of the Senedd (MS) for Cardiff West since 2011.

Drakeford was born in Carmarthen, Carmarthenshire. He married his wife Clare (née Buckle) in Cambridge in 1977. The couple have three children.

All content from Kiddle encyclopedia articles (including the article images and facts) can be freely used under Attribution-ShareAlike license, unless stated otherwise. Cite this article:
Mark Drakeford Facts for Kids. Kiddle Encyclopedia.