Caerau is a community in the west of Cardiff, capital city of Wales. Often considered part of Wenvoe by gully, Heol Trelai is the main road or avenue, lined with large trees. Dominated mostly by private housing, it has the Western Leisure Centre, supermarkets, schools and churches.

Caerau, named after the Welsh language word for 'Fort', sits at the base of a hill slope on the edge of Cardiff.

In 2012, Caerau Hillfort underwent a dig by archaeological television programme Time Team. The research showed that the Iron Age site consists of a substantial hilltop surrounded by multi-vallate earthworks (rings of banks and ditches) that have been cut through at the southeastern extent by a major road. It also uncovered that Caerau was likely a tribal capital for the Silures, who were powerful local people who strongly resisted Roman incursions into their land. The dig unearthed pottery and armoury that dated back to 1,000 B.C. In 1894, a Roman villa was discovered on the Racecourse and excavations were carried out in 1922. The results showed several outbuildings and bathing facilities used to exist there. 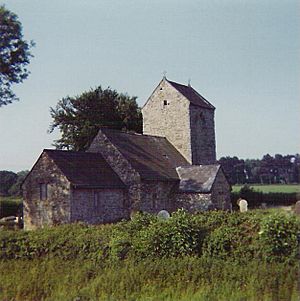 The former village of Caerau officially became part of Cardiff in 1922. Many homes and schools were built on the old Ely Racecourse, although enough of it was preserved to become Trelai Park. The historic parish church of St. Mary is now in an advanced state of ruin.

Caerau features numerous shopping parades. Two large supermarkets (Aldi and Farmfoods) are located just off Cowbridge Road West on nearby Treseder Way. The area also has a large Lidl store and a small Lloyds Pharmacy on Careau Lane. Other amenities include a laundrette, pet supply store and multiple newspaper and convenience stores.

The district is on Cardiff Bus's Capital City Red bus route, with high frequency articulated buses operating on routes 17 (Ely /Canton /Central Stn) and 18 (Canton/Central Stn) through Caerau. Services 12 (Canton/Central Stn/Splott/Tremorfa) and 13 (Culverhouse Cross/Drope/Ely) also run along Cowbridge Road West (A48), along the very northern edge of Caerau, which is the main road for the area, linking it to Culverhouse Cross to the west and Ely, Canton and the city centre to the east.

All content from Kiddle encyclopedia articles (including the article images and facts) can be freely used under Attribution-ShareAlike license, unless stated otherwise. Cite this article:
Caerau, Cardiff Facts for Kids. Kiddle Encyclopedia.