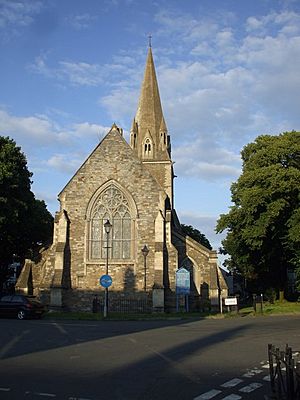 Canton (Welsh: Treganna) is an inner-city district and community in the west of Cardiff, capital of Wales, lying 2 miles (3.2 km) west of the city's civic centre. Canton is one of the most ethnically diverse of Cardiff's suburbs, with a significant Pakistani and Indian population. The total population of Canton is just in excess of 13,086, increasing to 14,304 at the 2011 census. It is also the most Welsh-speaking district of central Cardiff, with 19.1% of the population speaking Welsh.

The name (from "St. Canna's Town") refers to the 6th century female saint after whom Pontcanna is also named. Canton, also known as Treganna (tref town + Saint Canna), was a 13th-century manor in Llandaff. It became part of Victorian era Cardiff in 1875. 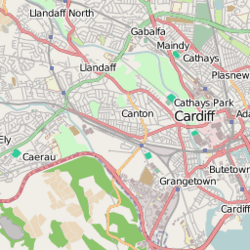 Canton, or Treganna in the Welsh language, was formed around a 13th-century Manor in Cardiff and assumed lands from nearby Llandaff and Leckwith parishes under the stewardship of an Earl (or Baron) de Kanetune, although today the manor comes under the jurisdiction of the Manor of Llandaff. It is believed that Canton is named after St Canna, the holy matron in the Celtic age of Saints, and Canna herself is reputed to have been a relative of King Arthur

In 1215 a parishioner called Lucia de Kanetune is recorded as occupying a field ‘near the Earl's wall’. In 1230 a man named as Walter de Canetune is named in the Cardiff charter, and signed the charter, obviously as a resident of quite high status. In 1262 a doctor or ‘Physicus’ called Nicholas de Kanetone gave evidence in a legal dispute between the Abbeys of Margam and St. Peter's, Gloucester. In 1290 Richard de Canetone is recorded as a witness on the new Cardiff charter. Also in 1290 (Cartae 1 page 294) records:

“John, son of Robert de Landaf, granting to Milo de Regny a rent of sixpence arising out of three acres of land with the appurtenances, which John de Lake, formerly bailiff of la Lekwiffe, had of my fee under Kanetone, in Sudcrofte. As also one penny rent from John, son of John Godman of Kaerdif, for three other acres in the same Sudcrofte under Kanetone." (Richard de Kaneton was also one of the witnesses to this charter).[this quote needs a citation]

From around 1250 for several hundred years Canton Cross was the site of the largest and most significant trading market in the South Wales area. The market was open daily except Sundays on the extensive Canton common lands at the junction where Llandaff Road and Leckwith Road now cross Cowbridge Road East, opposite where the Canton Cross Vaults public house still stands.

Goods, including all manner of fresh food stuffs, live animals and household items were brought from all over Cardiff and the South Wales Valleys to be traded at the market. Items that were to be exported were then transported or herded to the docks at Cardiff, Penarth and Swanbridge. Imports of fresh foods and tradeable goods were also brought to the market from those ports.

In the year 1450 stewardship of the Manor of Caneton is recorded as having been granted to Sir David ap Mathew, Lord of Llandaff manor but a resident of Radyr. 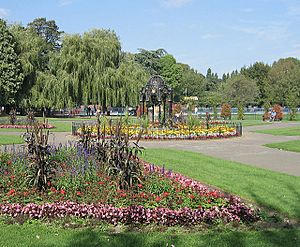 In 1853 St. Johns, Canton was completed and opened as a local chapel annexe of nearby Llandaff Cathedral. From around 1840, Halket Street, Canton, became home to a large number of Irish families, indeed Canton was the recognised centre of Cardiff’s increasing Irish community, most of whom were fleeing the potato famines in their own country and seeking work and housing in the ports of Liverpool and Cardiff. In 1870 the large Atlas Engineering works was built in Canton and opened its doors, creating a large number of new skilled jobs in the area.

The independent hamlet of Canton was incorporated as a district of the City of Cardiff by charter in 1875. Included in Canton was Pwll-coch, which had previously been considered part of Ely.

In 1899 the Manor House was recorded as still standing, on the west side of Canton Common but it was in a poor condition and in danger of falling down. At that time it was under the occupation of a Mr. Richard Williams, but there is no record of when the Manor House was eventually demolished.

The extensive common lands at Ely Common were already in the process of being converted into a municipal recreation ground called Victoria Park and new housing by the city council in 1899. The market near Canton Cross, which by then had wound down to a weekly cattle market, had been relocated to lands that now house Cantonian High School in adjacent Fairwater. The market yard and rows of stables would be full of the farmers’ carts and traps from all over the Vale of Glamorgan. The market dealt with sheep and pigs as well as cattle and the market buildings also included a slaughterhouse, so the animals could be butchered on site ready for transporting to the many butchers shops all over Cardiff. The market’s tram depot and stabling was also next to Severn Road Council School, trams ran on rails with overhead electric power from the depot and Victoria Park to the city centre and on to other locations in Cardiff from 1902 until they were replaced by Cardiff's electric trolleybuses in 1950. The traditional Canton Cross common land now has Cardiff City FC's Cardiff City Stadium football ground and Cardiff International Sports Stadium built on it, with the last remnant of the medieval market represented only by Bessemer Road fruit market. In recent years a large number of commercial car dealerships have moved into the area. 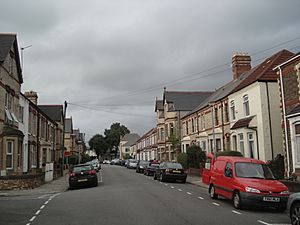 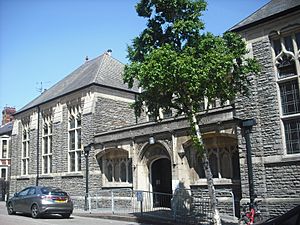 Canton has long been recognised as one of the most multi-cultural areas of Cardiff since the vast influx of Irish immigrants in the mid 19th century and today houses a significant and thriving Asian population such as Pakistanis and Indians.

The main road through the district is Cowbridge Road East, a busy thoroughfare with many shops as well as pubs and restaurants and independent retailers. Canton is home to Thompson's Park and Victoria Park, to the education centre Llanover Hall, and to the Chapter Arts Centre, which is housed in the former buildings of Canton High School.

Though the area has strong working class roots, many artists and young professionals have found the proximity to the city centre and the number of arts venues and pubs an attraction, which has resulted in gentrification and a bohemian feel. 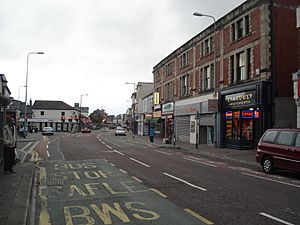 The main road running through the heart of Canton is Cowbridge Road East, which is served by many bus services. The following bus services all run through Canton:

Cowbridge Road East links the area with Culverhouse Cross, Ely, Caerau, Cardiff and Fairwater to the west and the city centre to the east.

Cardiff Canton TMD is home to the main depot of Arriva Trains Wales.

In the 2011 census it was recorded that 2,625 or 19.1% of Canton residents (over 3 years old) could speak Welsh. This was a significant increase on the figures for the 2001 census, which were 1,964 and 15.6%. Canton has two Welsh-medium primary schools, Ysgol Gymraeg Pwll Coch and Ysgol Gymraeg Treganna, and one Welsh-language place of worship: Salem (Presbyterian Church of Wales) on Market Road (founded 1856, current building built in 1910). The current Cardiff Chinese Christian Church on Llandaff Road was originally a Welsh-language baptist chapel (opened 1853), but the language of the services was changed to English in the late nineteenth century.

All content from Kiddle encyclopedia articles (including the article images and facts) can be freely used under Attribution-ShareAlike license, unless stated otherwise. Cite this article:
Canton, Cardiff Facts for Kids. Kiddle Encyclopedia.