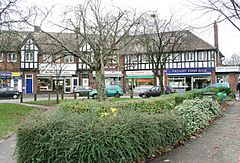 Fairwater (Welsh: Y Tyllgoed) is a district and community in the west of Cardiff, capital of Wales. It is located a few miles from Culverhouse Cross which connects Cardiff to the M4 motorway. The population taken at the 2011 census was 12,981.

The name Tyllgoed, meaning "dark wood" goes back to the 15th century. This leafy district is divided between the mainly privately owned 1930s semi-detached housing developments at the southern end, and more 1950s public housing stock towards the northern end closer to neighbouring Pentrebane. It includes Fairwater Park (known locally as "the Dell"), Fairwater Leisure Centre, a skatepark and numerous playing fields.

Fairwater is the historic name of one of the canons' stalls at nearby Llandaff Cathedral.

Fairwater has two secondary schools. The larger of the two, with over a thousand pupils, is the Welsh-medium Ysgol Gyfun Gymraeg Plasmawr. The other is Cantonian High School, which has nearly 700 pupils.

The building in which Plasmawr stands was originally opened in 1959 as Waterhall Secondary Modern School. Pupils at the school included Martyn Woodroffe an Olympic swimming Silver Medalist in 1968 Summer Olympics in Mexico. It is on the grounds of old Cantonian lower school, but in recent times has had many new developments built on the site. Peter Lea Primary and Fairwater Primary schools are in the area. Cantonian has produced several Welsh international football (soccer) players. In recent times Ryan Green (once Wales' youngest international), Jermaine Easter and Joe Ledley and, a little further back, John Toshack. Famous former pupils also include the model and Gary Lineker's wife Danielle Bux and director of the film Human Traffic, Justin Kerrigan.

Fairwater Brook was a childhood haunt of Roald Dahl, who lived in Radyr and studied in nearby Llandaff.

Fairwater Park, known locally as "The Dell" is the site of one of Britain's first artificial ski slopes, and is still a pleasant recreational area.

Fairwater Green is a local area of shops, supposedly named for the area of grass nearby.

The electoral ward of Fairwater falls within the parliamentary constituency of Cardiff West. It is bounded by Creigiau & St. Fagans to the west; Llandaff to the east; Canton to the southeast; and Ely to the south.

Fairwater is well served by public transport with three railway stations - Fairwater in the heart of the area, Danescourt in the north and Waun-Gron Park in the south. All 3 stations are on the Cardiff City Line with services northbound to Radyr and southbound to Cardiff Central via Ninian Park.

Cardiff Bus operates the following bus services through the area:

The main road running through the east of the area is Western Avenue (A48) linking it to Ely Bridge, Ely, Canton and the city centre to the south and Gabalfa, eastern districts and the M4 J30 Cardiff East to the north. St Fagans Road is a country road leading west out of Fairwater to St. Fagans, Ely, Culverhouse Cross and M4 J33 Cardiff West

All content from Kiddle encyclopedia articles (including the article images and facts) can be freely used under Attribution-ShareAlike license, unless stated otherwise. Cite this article:
Fairwater, Cardiff Facts for Kids. Kiddle Encyclopedia.