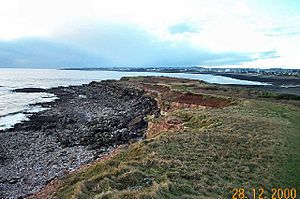 Sully Island from the west end

Sully Island (Welsh: Ynys Sili) is a small tidal island and Site of Special Scientific Interest at the hamlet of Swanbridge, Vale of Glamorgan, 400 yards off the northern coast of the Bristol Channel, midway between the towns of Penarth and Barry and 7 miles (11 kilometres) south of the Welsh capital city of Cardiff.

Access to the island is on foot at low tide from the car park of the Captain's Wife public house. It is 14 and a half acres in extent and is one of 43 (unbridged) tidal islands which can be reached on foot from the mainland of England, Wales or Scotland.

During the 13th century, the island was the base for Alfredo De Marisco, a Norman pirate known locally as The Night Hawk. In the Middle Ages the island was well known for its involvement in the local smuggling trade.

The island's name may mean "south lea" or "south pasture" or, like the nearby village of Sully it may be called after the Norman baronial family of Sir Reginald de Sully. The rate of tidal rise and fall in the area is the second highest in the world: only that of Bay of Fundy, Nova Scotia is greater. A rocky causeway connecting the island to the mainland is uncovered for approximately 3 hours either side of low tide, the island being cut off from the mainland for the rest of the day. This makes Sully Island a potentially dangerous place, and many people have been swept to their deaths while trying to leave the island as the tide rises very rapidly. All visitors to the island must exercise care and due diligence. There is now a timer near the island which gives visitors tidal times, letting them know if it's safe to cross.

There is evidence that the island was frequently visited by both Romans and Vikings and there is archeological evidence for remains of a Saxon multivallate promontory fort occupying the eastern end of the Island, on the summit of which is a Bronze Age barrow. It has been suggested by some that this was an armed stronghold, but it was more likely to have been a defended residence and farm homestead.

Swanbridge and the waterfront protected by Sully Island had been used as a commercial harbour and port for several hundred years, although there is no sign of this today. Cargo arrived and departed via the St Mary's Well Bay Road, which is now blocked off to through traffic, en route for the traditional market at Canton Cross in Cardiff. As late as the early 1970s the harbour's iron mooring rings could still be seen at the eastern end of the bay.

During the 16th century several historical records show that the trader masters were supposed to pay an import duty to local officials, but many attempted to avoid the payments by smuggling the cargoes ashore. In 1569 court records show that the harbour official seized contraband consisting of 28,000 lb (13,000 kg) of cheese and eighty barrels of butter arriving illegally at Swanbridge. In 1658 the harbour was being used as a landing place for illegal immigrants, described at the time as "undesirables".

A small fleet of fishing vessels were located at Swanbridge harbour and it is likely that the row of cottages, that were converted during 1976 and 1977 into the Captain's Wife public house, were the traditional homes of the local fishermen and their families.

Owing to the tricky tides and narrow access many ships have sunk in the vicinity of the island. Several sources record that the famous Antarctic survey vessel, the SY Scotia, was wrecked on the island during 18 January 1916. Local elderly residents from as far away as Barry remember arriving at Swanbridge as children, with sacks to harvest coal spilled on the foreshore from the wreck, over several weeks. There is a skeleton of a wreck still visible on the island's north foreshore facing Swanbridge, but this vessel's keel is too short to have been the Scotia.

The survey ship that the oceanographer Dr William Speirs Bruce used on the Scottish National Antarctic Expedition, 1902–04, was originally a sealer named Hekla, built in Norway in 1872. In 1889 the Norwegian skipper Ragnvald Knudsen explored the northeast coast of Greenland between latitudes 74° and 75°, and in 1891–92 the ship was used by the Danish naval officer, Lieutenant C. Ryder, to explore the inner recesses of Scoresby Sund, finally visiting Angmagssalik.

In 1902, renamed Survey Yacht Scotia and captained by Tam Robertson from Peterhead, she sailed to the Weddell Sea under the leadership of Bruce. The southern winter of 1903 was spent at Laurie Island in the South Orkney Islands, and in March–April 1904 the party discovered 150 miles (240 km) of previously unknown coastline of the Antarctic continent, reaching a farthest south of 74°01′S, 22°00′W. An extensive programme of marine survey and biological research was carried out. Back in the UK, Bruce sold the ship, and she returned to sealing, based in Dundee until appointed to be the first international North Atlantic Ice Patrol ship after the tragedy of RMS Titanic. The Great War caused her to become a freighter in the English Channel area until she caught fire and was burnt out on Sully Island.

From 1890 until the end of the 1960s Swanbridge was connected northward to Penarth and Cardiff and westward to Barry and the South Wales Valleys by an extension of the Taff Vale Railway line. The coastal spur fell victim to the sweeping Beeching Axe in 1968. Swanbridge Halt near the main Lavernock Road junction was closed and is now overgrown with weeds and brambles. The redundant rail track bed has mostly been sold into private ownership and built on, with any unsold stretches being overgrown and impassable as far as the Fort Road bridge at Lavernock. Between Lavernock and Penarth the track bed is a rural greenway and cycle track.

When the rail link arrived at the start of the 20th century the bays of Swanbridge, St Mary's Well and Lavernock became popular summer time destination for day trippers from Cardiff, Penarth and the South Wales valleys particularly at weekends and on Bank Holidays. For nearly a hundred years there was a busy and profitable cafe and ice cream parlour, located at the St Mary's Well Bay end of the Swanbridge carpark, that was closed and demolished around 1970 when the through road was blocked off to traffic.

Watercolour artist Thomas Frederick Worrall, who lived in Barry from 1913, painted many views of the island.

The noted British biologist Brian J. Ford used to live and write at Swanbridge and explored Sully Island frequently. He also carried out extensive ecological studies, while surveying and mapping both the island and the foreshore. Ford recorded many plants unusual for the area, including the bee orchid, the marine spleenwort and the adder's tongue fern.

The island once supported a vast colony of rabbits. When the disease myxomatosis arrived in Britain, during 1953 from France, the mainland population of rabbits was quickly decimated. Mostly because of its remoteness from the mainland the Sully Island rabbits survived for many years until the disease finally arrived on the island, some suspect through a human agency. From time to time new rabbit colonies set up home on Sully Island but at nowhere near the early 1950s levels.

The waters around Sully Island are fished for species such as cod, whiting, pouting, dogfish, conger eel and bass.

Any trees that grew on the island have been long cut down and even scrubby bushes struggle to gain a foothold on the sandy and loamy surface. Most of the island is covered with a coarse grass. A damp central depression on the island supports a reed bed about 0.5ha in extent.

The sea cliff exposures of Sully Island provide an excellent insight into the environment of the area in Triassic times, approximately 200 million years ago. Red mudstones, sandstones and breccias (rocks made from angular pebbles) indicate that this area was a beach situated on the margin between steep semi-desert land and a large shallow lake or marine lagoon. These Triassic rocks were deposited on top of much older Carboniferous limestone which can be seen at the base of the cliffs.

In 1985 the Vale of Glamorgan Council refused an application for outline planning permission for a Health and Holiday Hydro facility on Sully Island.

In July 2011, the island was marketed for sale by a firm of local chartered surveyors, Cooke & Arkwright. The island was advertised as comprising 14.5 acres (59,000 m2). An initial guide price of £1.25 million was reduced to just £95,000, due to lack of interest. Grassroots campaign "Save Sully Island" attempted to raise the purchase price, but failed. However, a mystery buyer stepped in at the last minute with a bid well in excess of the guide price. The buyer, a sailor, had contributed to the grassroots campaign, and promised to keep the island open to the public.

All content from Kiddle encyclopedia articles (including the article images and facts) can be freely used under Attribution-ShareAlike license, unless stated otherwise. Cite this article:
Sully Island Facts for Kids. Kiddle Encyclopedia.