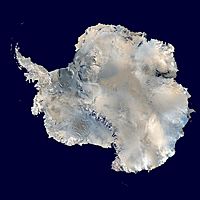 An aerial view of Antarctica. Weddell Sea is the 'bay' in the top left corner. 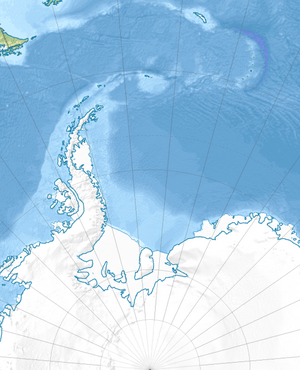 Not to be confused with the Wandel Sea.

The Weddell Sea is part of the Southern Ocean and has the Weddell Gyre. The easternmost point is Cape Norvegia at Princess Martha Coast, Queen Maud Land. Much of the southern part of the sea, up to Elephant Island, is permanent ice. The sea is claimed by Argentina and Britain. There is also a part in the claim of Chile. At its widest the sea is around 2,000 km across. In area it is around 2.8 million km². 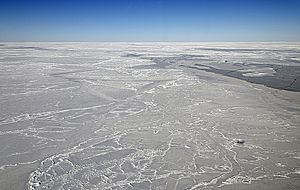 Scarred and chiseled sea ice in the Weddell Sea 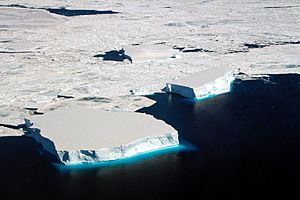 The sea is named after the British sailor James Weddell who entered the sea in 1823.

The Weddell Seal is one of the animals that live in the area.

The Weddell Sea has said by scientists to have the clearest water of any sea.

All content from Kiddle encyclopedia articles (including the article images and facts) can be freely used under Attribution-ShareAlike license, unless stated otherwise. Cite this article:
Weddell Sea Facts for Kids. Kiddle Encyclopedia.