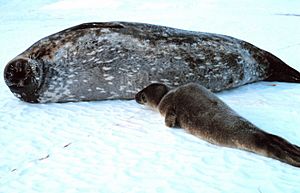 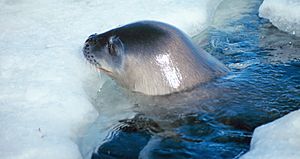 A Weddell seal breathing in a hole in the ice.

The Weddell seal is a seal that is common in Antarctica. It is named after James Weddell, who discovered it. Estimations are that there are half a million to a million of these animals left, which makes it the most common seal in Antarctica, after the Crabeater seal. During the winter, most Weddel seals do not migrate northwards. Instead, they keep open a hole in the ice, by gnawing it with their teeth.

All content from Kiddle encyclopedia articles (including the article images and facts) can be freely used under Attribution-ShareAlike license, unless stated otherwise. Cite this article:
Weddell Seal Facts for Kids. Kiddle Encyclopedia.