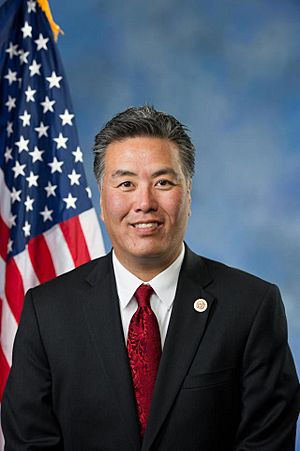 In November 2012, Takano was elected to the U.S. Representative for the 41st District of California.

Takano was born in Riverside, California. He is the son of Japanese American parents. He is Sansei, which means that he is the grandson of people born in Japan who immigrated to the US.

After the Japanese bombed Pearl Harbor, the Takano family was relocated and interned from California to "War Relocation Camps" during World War II. He graduated from Harvard University in 1983.

In March 2020, Takano endorsed Senator Bernie Sanders for President of the United States.

All content from Kiddle encyclopedia articles (including the article images and facts) can be freely used under Attribution-ShareAlike license, unless stated otherwise. Cite this article:
Mark Takano Facts for Kids. Kiddle Encyclopedia.