Marulan is a small town in the Southern Tablelands of New South Wales, Australia in the Goulburn Mulwaree Council local government area. It is located south-west of Sydney on the Hume Highway, although it bypasses the town proper. Marulan lies on the 150th meridian east. It has a railway station on NSW TrainLink's Southern Highlands Line. Marulan was previously known as Mooroowoolen.

In the early years of European settlement at Sydney, exploration southwest of Sydney was slow. In 1818, Hamilton Hume and James Meehan reached "the Goulburn plains" for the first time. Governor Lachlan Macquarie ordered the construction of the Great South Road (the basis of the northern end of the Hume Highway) in 1819 from Picton to the Goulburn Plains. 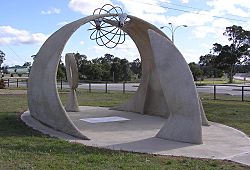 The southern part of Macquarie's road ran from Sutton Forest roughly along existing minor roads to Canyonleigh, Brayton, Carrick and Towrang, where it joined the current route to Goulburn. Branching from this route (now called the Illawarra Highway at this point) just south of Sutton Forest, a road, now known as Old Argyle Road, developed in the 1820s. It ran to Bungonia, via Wingello, Tallong, and the southern outskirts of Marulan, all, except Wingello, located in Argyle County, along with Goulburn. In the early 19th century Bungonia was expected to become a major centre, but it subsequently proved unsuitable for intensive agriculture.

When Thomas Mitchell rerouted the Great South Road in the 1830s, he decided to bring these two roads together and build a junction at old Marulan, with roads proceeding to Goulburn and Bungonia. When the Main Southern railway reached Marulan in 1868, the town migrated 3 km north to the railway station. Nevertheless, the old cemetery remains at the Bungonia Road intersection. A quarry is being developed near the intersection, so an interchange has been built there.

All content from Kiddle encyclopedia articles (including the article images and facts) can be freely used under Attribution-ShareAlike license, unless stated otherwise. Cite this article:
Marulan, New South Wales Facts for Kids. Kiddle Encyclopedia.