Maslama ibn Abd al-Malik (Arabic: مسلمة بن عبد الملك‎code: ar is deprecated , in Greek sources Μασαλμᾶς, Masalmas; fl. 705 – 24 December 738) was an Umayyad prince and one of the most prominent Arab generals of the early decades of the 8th century, leading several campaigns against the Byzantine Empire and the Khazar Khaganate. He achieved great fame especially for leading the second and last Arab siege of the Byzantine capital Constantinople.

Maslama is first mentioned as leading, along with his nephew al-Abbas ibn al-Walid, the annual summer campaign (ṣawā'if) against the Byzantine Empire in 705. His first major expedition was the 707–708 campaign against the Byzantine city of Tyana in southeastern Asia Minor, which was launched in retaliation for the defeat and death of the distinguished general Maimun the Mardaite the year before. The siege lasted through winter and the Arab army faced great hardship, but after the Arabs defeated a Byzantine relief force in spring 708, the city surrendered. A few months later, in the summer, Maslama led another expedition into Asia Minor and defeated a Byzantine army near Amorium, while in 709 he raided into the region of Isauria.

In the same year, Maslama was appointed military governor of the Jazira, Armenia and Adharbayjan, succeeding his uncle Muhammad ibn Marwan. This he added to the post of governor of Jund Qinnasrin in northern Syria, which he already held. His governorship of Jund Qinnasrin was not as well-documented by early Arabic chroniclers as his other posts, although historian Jere L. Bacharach claims Maslama was the likely patron of the Umayyad Mosque of Aleppo and possibly responsible for some construction works in Qinnasrin. Together, command of these provinces effectively gave him complete control of the Caliphate's entire northwestern border. From this position he launched several campaigns against the Byzantines, devastating Galatia and sacking Amaseia in 712, and taking Melitene in 714. He was also the first to establish the Caliphate's presence north of the Caucasus, leading to the commencement of direct conflict with the Khazars (the Second Arab–Khazar War). In 710, he marched his army up to Bab al-Abwab ("Gate of Gates", the Arabic name of Derbent), which he took and destroyed during a second expedition in 714.

The Arab attack on Constantinople, from the Manasses Chronicle

From 715 Maslama was the leading general in the plans of his brother, Caliph Sulayman, to conquer the Byzantine capital, Constantinople, as Sulayman himself was too ill to lead the campaign in person. Maslama led a huge army, which sources report to have numbered 120,000 men and 1,800 ships. In late 715, the Arab vanguard crossed the Taurus Mountains into Byzantine territory, Maslama following in spring 716 with the main army and the fleet. The Arabs' plans were aided by the recurrence of civil strife, which had plagued the Byzantines since 695; Emperor Anastasius II was overthrown by Theodosius III in 715, who was in turn opposed by the strategos of the Anatolic Theme, Leo the Isaurian. Maslama hoped to use the divisions among the Byzantines for his own benefit and initiated contacts with Leo, but the latter used the negotiations to outwit the Arab general and occupied for himself the strategic city of Amorium, which Maslama had intended to use as his winter base. As a result, Maslama marched further west, to the coastlands of the Thracesian Theme. There he spent the winter, while Leo marched against Theodosius in Constantinople, which he entered in March 717.

In early summer 717, Maslama with his army crossed from Asia into Europe over the Dardanelles, and proceeded to besiege Constantinople from land and sea. His navy, however, was soon neutralized by the use of Greek fire, and as his army was unable to overcome the city's land defences, the siege continued into the winter, which was especially severe that year, with snow covering the ground for three months. Maslama had brought along many supplies, but they either soon ran out or were lost—Arab accounts make much of Leo tricking the Arab general yet again during negotiations into handing over or destroying a significant part of his hoarded supplies—and the army began to suffer from hunger and disease. In spring, reinforcements arrived in the form of two large fleets from Egypt and Ifriqiya, but a large part of their crews, who were mostly conscripted Christians, went over to the Byzantines, and Leo's navy managed to destroy or capture the Arab fleets. The Byzantines also defeated an Arab army marching to aid the besiegers through Asia Minor, while Maslama's men had to contend with attacks by the Bulgars as well, which cost them many men. The siege had clearly failed, and the new Caliph, Umar II (r. 717 – 720), ordered Maslama to retreat. On 15 August 718, after thirteen months of siege, the Arabs departed.

Governorship in Iraq and the Caucasus

After his failure at Constantinople, Maslama was dispatched to Iraq to quell the Kharijites. Following Umar's death and the accession of his brother Yazid II in 720, he was tasked with the suppression of the revolt of Yazid ibn al-Muhallab, whom he defeated and killed in August 720. He nevertheless fell out of favour with the Caliph, who resented and feared his power as governor of both Iraqs, as well as his interfering in the succession: Maslama favoured his brother Hisham over Yazid's son Walid. Yazid soon recalled Maslama from his post, ostensibly because he had failed to deliver his provinces' tax haul to Damascus, and replaced him by his protege, Umar ibn Hubayra. 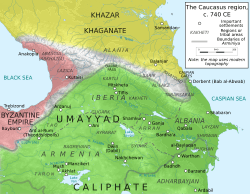 Maslama then disappears from the sources and re-emerges in 725, shortly after Yazid's death and the accession of Hisham, who sent Maslama to replace al-Jarrah ibn Abdallah al-Hakami in the Caucasus front against the Khazars. Initially, however, Maslama was mostly active in the Byzantine front, and the war against the Khazars was delegated to al-Harith ibn Amr al-Ta'i. In winter 725, Maslama led an expedition against Asia Minor from Melitene, which culminated in the sack of Caesarea on 13 January 726. Along with the capture of Gangra by Abdallah al-Battal in 727, this was one of the major successes of Arab arms against the Byzantines in the 720s. A few months later, he also led the otherwise unremarkable northern summer expedition into Byzantine territory. In 727–728, his attention was diverted by Khazar attacks which reached deep into Adharbayjan. Although Maslama was able to drive them back and recover control of the Darial Pass, his 728 campaign across the Caucasus was difficult, bloody and indecisive. Maslama's troops were reportedly engaged in up to thirty or forty days of constant fighting in miserable weather, and although he claimed victory in a battle over the Khazar khagan himself, the expedition did not achieve any results, and came close to being defeated. Certainly it did little to stop Khazar attacks south of the Caucasus, which resumed in 729. Maslama was removed from office in the same year, and replaced by al-Jarrah. He is then recorded by the Byzantine chronicler Theophanes the Confessor as having been responsible for the sack of the fortress of Charsianon in late 730, but Arab sources credit Mu'awiya ibn Hisham for this act.

The Friday Mosque of Derbent (Bab al-Abwab), dating to the city's re-foundation by Maslama

In the Caucasus, the situation quickly deteriorated after Maslama's departure. While al-Jarrah campaigned north of the Caucasus, the Khazars swung behind him and attacked his main base, Ardabil. Hastening to relieve the city, al-Jarrah was defeated and killed, and his army practically annihilated in a battle outside the city on 9 December 730. Faced with this crisis, the Caliph appointed Maslama as the new governor of Armenia and Adharbayjan but, in the meantime, the veteran general Sa'id ibn Amr al-Harashi managed to recover the situation and defeat the Khazar army. Maslama, allegedly out of jealousy for Sa'id's successes, had Sa'id imprisoned until Hisham ordered his release. Throughout 730 and 731 Maslama, with a large army at his disposal, cleared the provinces south of the Caucasus of the Khazars, and then advanced beyond the mountains, sacking a couple of settlements and defeating the khagan in pitched battle. He also recovered the strategic fortress of Bab al-Abwab from the Khazars who had occupied it by poisoning its water supply, and reorganized it as a military colony (misr), resettling it with 24,000 soldiers. His tenure however was evidently judged as not successful enough, and he was replaced on 3 March 732 by Marwan ibn Muhammad.

Maslama thereafter retired from public life, possibly to his extensive estates in northern Syria. He died on 24 December 738.

As the commander of the great assault on Constantinople and the "founder of Islamic Derbent", for over twenty years in the early 9th century, Maslama was "one of the principal props of Umayyad power and a foremost actor on the stage of the East", according to Douglas M. Dunlop. His fame spread far and wide in the Muslim world, and his exploits and chivalry passed into legend.

Maslama's attempt to capture Constantinople in particular became celebrated in later Muslim literature, with several surviving accounts, mostly semi-fictional, in which the historical defeat was transformed into a sort of victory: Maslama was said to have departed only after symbolically entering the Byzantine capital on his horse accompanied by thirty riders; Leo received him with honour and led him to the Hagia Sophia, where the emperor paid homage to the Arab general. The tales of the siege influenced similar episodes in Arabic epic literature, where Maslama appears associated with Abdallah al-Battal, another legendary Arab hero of the wars against Byzantium. His campaign against Constantinople in particular continued to provide inspiration to later Muslim authors, from the Muhadarat al-Abrar ascribed to the 13th-century Andalusian mystic Ibn Arabi, to the khamsa of the 17th-century Ottoman poet Nargisi.

Furthermore, Byzantine tradition, as recorded in the 10th-century De Administrando Imperio, held that during the siege Maslama convinced the Byzantines to build Constantinople's first mosque, near the city's praetorium. In reality, the mosque near the praetorium was most likely erected in about 860, as a result of an Arab embassy in that year. It survived down to the sack of the city by the Fourth Crusade. Later Ottoman tradition also ascribed the building of the Arap Mosque (located outside Constantinople proper in Galata) to Maslama, although it erroneously dated this to around 686, probably confusing Maslama's attack with the first Arab siege in the 670s.

All content from Kiddle encyclopedia articles (including the article images and facts) can be freely used under Attribution-ShareAlike license, unless stated otherwise. Cite this article:
Maslama ibn Abd al-Malik Facts for Kids. Kiddle Encyclopedia.