Massimo Moratti (born 16 May 1945) is an Italian billionaire petroleum businessman, the former owner of Inter Milan and chairman of the Saras Group, founded in 1962 by his father, industrialist Angelo Moratti. The main production site of the Saras Group is the Sarroch refinery located on the island of Sardinia, one of Europe's only six supersites, with a capacity of 300,000 barrels per day, representing 15% of refining capacity in Italy. In recent years, initially to enable independence of the Sarroch refinery from terms of energy, the Saras Group has entered into the production of electricity and is expanding its production of alternative energy sources, particularly in the field of wind energy, through its subsidiaries Sarlux and Sardeolica, the latter of which is controlled indirectly through the company Eolici Ulassai.

From 1995 until 2013, Moratti was the chairman of F.C. Internazionale Milano. He is said to have spent around €1.5 billion of his personal fortune in the transfer market, and was famous for signing numerous football superstars.

He was Inter's honorary chairman, and also a United Nations goodwill ambassador. In 2013, he was inducted into the Italian Football Hall of Fame.

Moratti is the fourth son of industrialist Angelo Moratti, who was the chairman of Football Club Internazionale Milano during the team's "Golden Age" from 1955 to 1968. Born in the family villa in the Bosco Chiesanuova, close to Verona, he graduated from Libera Università Internazionale degli Studi Sociali Guido Carli with a master's degree in Political Science. 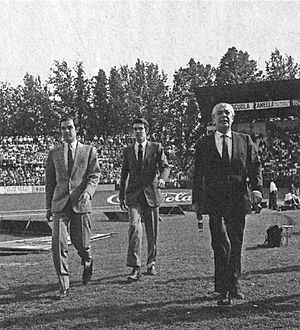 On his father's death, Moratti inherited his shares in the Saras Group, engaged in the refining of petroleum, where he is presently CEO. Moratti is also the owner of Sarlux, headquartered in Cagliari, which focuses on the production of electricity from waste oil.

Married to the environmental activist Emilia Moratti (née Bossi), the couple have five children. In September 2009, Sauro Gori announced that Moratti had been appointed a United Nations goodwill ambassador.

In May 2011, Moratti supported Giuliano Pisapia's bid to become mayor of Milan against his sister-in-law Letizia. His call for 'change' was perceived as an extension of his rivalry with A.C. Milan, Silvio Berlusconi, from football to the political sphere.

Moratti is said to have spent around €1.5 billion of his personal fortune in the transfer market in his time as chairman. His most famous signing was that of Ronaldo from FC Barcelona in the summer of 1997, at a time when he was widely considered the best player in the world. Later, in July 1999, Moratti sanctioned a then world-record €48 million purchase of striker Christian Vieri, and has purchased numerous others, including Roberto Carlos, Hernán Crespo, Adriano, Iván Zamorano, Maicon, Roberto Baggio, Zlatan Ibrahimović, Luís Figo, Patrick Vieira, Samuel Eto'o, Alvaro Recoba and Wesley Sneijder.

However, criticism also been levelled against Moratti, as he fired coaches frequently. Except keeping Giuseppe Baresi and Daniele Bernazzani as backroom staff in the first team or in the youth system, as well as Marco Branca as one of the directors, the team had changed from Rafael Benítez, Leonardo, Gasperini and most recently Ranieri in just two seasons. Roberto Mancini and José Mourinho were the only two trophy winning and longest serving coach in recent years. Before Mancini, Massimo employed more than 10 short-lived coaches, including Roy Hodgson, Marcello Lippi, Marco Tardelli, Héctor Cúper and Alberto Zaccheroni.

The day after Ranieri was dismissed, chief scout of the first team Giovanni Battista Lanfranchi was fired and replaced by the former technical commission of Udinese, Valentino Angeloni. Lanfranchi had served for Inter for 13 years in different positions.

In November 2013, International Sports Capital took control of 70% of the club. Indonesian businessman Erick Thohir, a part-owner of that company, was elected chairman of Inter, but Moratti remained with the club as the honorary chairman.

In June 2016, Moratti's Internazionale Holding S.r.l. sold all its stake in Inter Milan to Erick Thohir's Nusantara Sports Ventures HK Limited for €60 million (and re-sold to Zhang Jindong's Suning Holdings Group). As of 2018, Moratti's wife, Milly Moratti, remained in the advisory board of Inter. However, Moratti himself, was no longer the honorary chairman of the club. Other members of the Moratti family, Angelomario Moratti, Carlotta Moratti, Giovanni Moratti, remained as members of the board of a subsidiary of the club, Inter Futura.

All content from Kiddle encyclopedia articles (including the article images and facts) can be freely used under Attribution-ShareAlike license, unless stated otherwise. Cite this article:
Massimo Moratti Facts for Kids. Kiddle Encyclopedia.