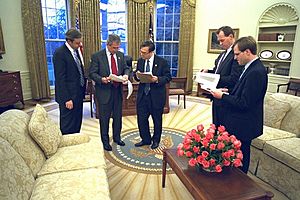 Scully was born in Casper, Wyoming And lived his childhood throughout Colorado, Ohio, and New York,. He attended Arizona State University in the 1980s. He married Emmanuelle Boers in 1998. They have two sons. They lived in Virginia during the Bush years, and in 2008 when Matthew was working for the McCain/Palin campaign. After John McCain lost to Barack Obama, they moved back to Los Angeles, California. Then in 2013 they moved to Phoenix, Arizona and currently live there.

Scully worked as a speechwriter in the 2000 presidential campaign, and served as a special assistant and senior speechwriter for President George W. Bush from January 2001 to August 2004. He also wrote speeches for vice-presidents Dan Quayle and Dick Cheney, Governor Robert P. Casey of Pennsylvania, and Bob Dole.

Prior to the 2008 Republican National Convention, Senator John McCain (the Republican presidential nominee to-be) asked Scully to write the acceptance speech for his vice presidential nominee, whom McCain had not yet chosen. Scully wrote the speech two weeks before the convention. He wrote the speech for a man to deliver, not a woman. Four days before the convention, Scully was surprised when he was informed that Alaska Governor Sarah Palin was to be McCain's running mate. Scully then worked all night to tailor the speech to Palin and also to incorporate new campaign strategy shifts that were being rapidly formed in intensive discussions by McCain campaign staff.

Palin delivered the 40-minute speech at the convention on September 3, 2008.

Scully was hired along with John McConnell to write "the biggest speech of Melania Trump’s life," to be delivered on July 18, 2016, at the 2016 Republican National Convention. Scully and McConnell sent Ms. Trump a draft a month before the convention; however, Ms. Trump rewrote most of the speech herself, inserting "word-for-word repetition of phrases" from Michelle Obama's speech at the 2008 Democratic National Convention, leading to focused criticism of Ms. Trump.

Scully is the author of Dominion: The Power of Man, the Suffering of Animals, and the Call to Mercy (2002), described by Natalie Angier in a book review published in The New York Times (October 27, 2002) as a "horrible, wonderful, important book... because the author, an avowed conservative Republican and former speechwriter for George W. Bush, is an unexpected defender of the animals against the depredations of profit driven corporations, swaggering, gun-loving hunters, proponents of renewed 'harvesting' of whales and elephants and others who insist that all of nature is humanity's romper room, to play with, rearrange, and plunder at will." Nichols Fox in a review published in The Washington Post wrote that Dominion is "destined to become a classic defense of mercy."

Scully served as literary editor of National Review and has written for The New York Times, The Wall Street Journal, The Washington Post, The Los Angeles Times, The Atlantic Monthly, and The American Conservative.

All content from Kiddle encyclopedia articles (including the article images and facts) can be freely used under Attribution-ShareAlike license, unless stated otherwise. Cite this article:
Matthew Scully Facts for Kids. Kiddle Encyclopedia.