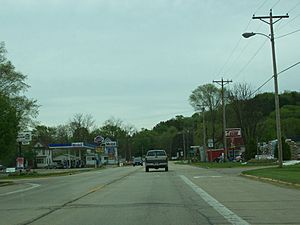 Mazomanie is a village in Dane County, Wisconsin, United States. The population was 1,652 at the 2010 census. The village is located within the Town of Mazomanie. It is part of the Madison Metropolitan Statistical Area.

The land on which rests the town of Mazomanie fell within the hunting grounds of the Hočąk, or Winnebago, Indian nation. About a decade after the Winnebago cession of 1832, there were only a small number of white settlers in the area. What precipitated the birth of the town was the advent of the Milwaukee and Mississippi Railroad in 1855, which passed through the region to connect Milwaukee with La Crosse. The superintendent of the railroad, Edward Brodhead, gave the village its name; many years later, he explained its derivation: “He (Mazomanie) was an Indian chief in our state and was well known to the old gentleman, H.L. Dousman, who said the Indians pronounced it as though it was spelled Man-zo-ma-nie and the English of it is Iron Horse, which I adopted for the name of a railroad town and also for the name of my horse.” This distinguished chief was Mą́zamąnį́ga, "Iron Walker."

The Hočągara, who have persisted in the area despite many attempts to eject them, call this town Mą́zamąnį́, dropping the suffix -ga (a definite article used to indicate a person's name). The first syllable of this name is pronounced as Brodhead indicated ('man') since the /ą/ is nasalized. The first element of the name is mąs, "iron, metal, ax," which before a consonant may be softened to mąza- or mąze-, although the free standing form mąz is also known. This is seen in the variant forms mązara, mązera, "the ax." In like fashion, in the same sources, we find the names Mązawįga or Mązewįga, "Iron Woman." This accounts for the variant name of the chief recorded by Col. John Kinsey as Mau-zay-mau-nee-kaw [Mązemąnįka]. The second part of the name is formed by the word mąnį́, which means "to walk, he walks" — thus "Iron Walker."

The double meaning of this name has long been appreciated: “The proprietors [of the railroad] have christened it Mazo-Manie, The-Iron-that-Walks, after a somewhat noted Indian chief; and as it is the offspring of an iron way, the name is not inappropriate.” The actual village of Iron Walker was located near Watertown, about 45 miles to the east. Dodsworth, however, adduces considerations that greatly complicate the eponymy of the present day Mazomanie. The town for some time was known as "Mazo Manie," and recalls in its spelling the name of a pair of Wahpeton Dakota chiefs of that era named Maz-zo-ma-nee. The Dakota (Sioux) language is akin to Winnebago, and it may be immediately appreciated that these names are exactly cognate to one another. Both of the Dakota chiefs were known to H.L. Dousman, the aforementioned source of Brodhead's information about the Indian names. He also knew the Hočąk chief, having been caught up in the incident that led to that chief's notoriety.

It transpired that in October 1836, Iron Walker had shot dead the well-known interpreter Pierre Poquette in an affair of honor. He was initially convicted of murder, but in a second trial was acquitted. Dousman acted as guardian of Poquette's orphaned children and petitioned to secure for them a pension. Dodsworth concludes that the town was intended to have been named for the Dakota chief. However, the proper rendering of the Dakota name is Máza-máni, lacking the nasalized letter to which Brodhead referred. Furthermore, neither of them was "an Indian chief in our state [Wisconsin]," but were from Minnesota. The real attraction of the spelling and pronunciation now in effect is made clear in a newspaper article of the time: “We are daily asked how to pronounce this beautiful looking name. We have heard various ways, but none that sounded so naturally and well as by accenting the second syllable, thus Ma-zom-anie, the accent as in Menominee. That makes a very pretty thing of it. It is the station on the Mil. & Mis. R. R. 22 miles west of here.” The /o/ in the name is a pure artifact of introducing the Indian name into English, and is found in neither Dakota nor Winnebago. The present rendering of the town's name owes to euphony and spelling conventions, none of which invalidates Brodhead's attribution of the name to the gunslinging chief of the Hočągara.

By the nation's centennial, Mazomanie had grown to 1,100 people, making it the second largest community in Dane County. Since that time, the village has gained only 350 people, but its small size and slow growth has preserved its nineteenth century character. The village has thirty-four commercial buildings on the National Register of Historic Places, the best known among these the Mazomanie Railroad Depot which has, with minor changes, remained as it was when it was built in 1857. 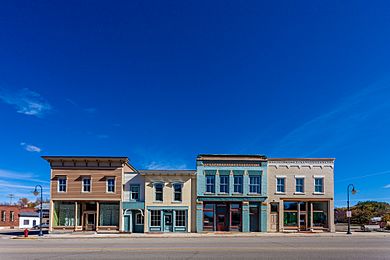 There were 689 households of which 32.2% had children under the age of 18 living with them, 51.4% were married couples living together, 11.3% had a female householder with no husband present, 4.5% had a male householder with no wife present, and 32.8% were non-families. 25.8% of all households were made up of individuals and 9.6% had someone living alone who was 65 years of age or older. The average household size was 2.40 and the average family size was 2.90.

There were 594 households out of which 35.5% had children under the age of 18 living with them, 56.1% were married couples living together, 11.1% had a female householder with no husband present, and 28.1% were non-families. 23.6% of all households were made up of individuals and 9.1% had someone living alone who was 65 years of age or older. The average household size was 2.50 and the average family size was 2.94.

All content from Kiddle encyclopedia articles (including the article images and facts) can be freely used under Attribution-ShareAlike license, unless stated otherwise. Cite this article:
Mazomanie, Wisconsin Facts for Kids. Kiddle Encyclopedia.