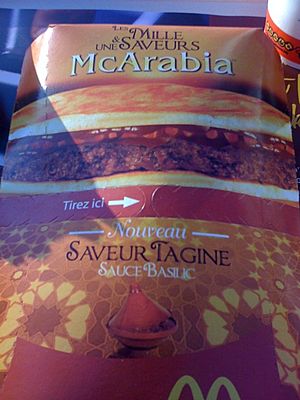 The McArabia is a pita bread sandwich available at all McDonald's outlets in Arab countries and Pakistan. It is known as the Grilled Chicken foldover in Singapore, Malaysia and South Africa, as McOriental in Spain, France and Holland, the McTurco in Turkey, Greek Mac in Greece and Cyprus, and as the McKebab in Israel. The sandwich was originally made to meet West Asian local taste.

The Sandwich was introduced as the Greek Mac in 2001 in Greece.

The McArabia was introduced in Saudi Arabia and UAE in March 2003 due to a sharp fall of profits in 2002, and declared a permanent product, due to boycotts on American brands and restaurants over the war in Iraq and claiming that the ingredients were not from local vendors. The first version of the sandwich used grilled chicken with pita bread which was imported from the UK for the first week, then switched to local bakers. In 2004, the Kofta variant was added, while in 2005, the sandwich was introduced in Malaysia and a limited spicy beef variant in 2006.

All content from Kiddle encyclopedia articles (including the article images and facts) can be freely used under Attribution-ShareAlike license, unless stated otherwise. Cite this article:
McArabia Facts for Kids. Kiddle Encyclopedia.