McMahons Point is a harbourside suburb on the lower North Shore of Sydney, New South Wales, Australia. McMahons Point is located 3 kilometres north of the Sydney central business district, in the local government area of North Sydney Council. McMahons Point sits on the peninsula flanked by Berrys Bay to the west and Lavender Bay to the east. The lower tip of the peninsula is known as Blues Point, which offers expansive views of Port Jackson (Sydney Harbour). The postcode is 2060.

Once predominantly working-class, it is now among Sydney's most exclusive localities. McMahons Point is primarily a medium-to-high-density residential area and is bordered by the surrounding suburbs of Waverton, North Sydney and Lavender Bay. Real estate north of Sydney Harbour in this collection of villages is set at a premium due to the area's low crime rate, cafes, restaurants, pubs, parks, accessibility to bus, train and ferry networks plus expansive views of the Sydney City CBD.

McMahons Point is named after Maurice McMahon, an Irish manufacturer of brushes and combs who, in 1864, built his home on the headland. He became mayor of the borough of Victoria (later North Sydney) in 1890.

The original occupants of this region were the Cammeraygal. These people lived along the foreshores and in bushland, cliffs and rock shelters prior to European settlement.

Land in this area was originally settled and farmed by James Milson (1785-1872), a Napoleonic War veteran, in 1806. Further grants were subsequently made in 1817 to Billy Blue, a Jamaican convict turned Sydney Harbour waterman, which remained within his family until the 1850s. Subsequently, the estate was progressively subdivided, with the earliest developments occurring on the northern end. Blues Point Road had been gazetted from 1839 as a thoroughfare from the ferry wharf to the St Leonards township. Most of the middle and southern sections of the peninsula were subdivided by the 1870s. A tram line was extended to McMahons Point in 1909, further stimulating development, particularly along Blues Point Road.

Large numbers of passenger and vehicular ferries travelled between Blues Point/McMahons Point and the city at the turn of the century. When the Sydney Harbour Bridge opened in 1932, the wharves of McMahons and Blues Point provided services every 10–15 minutes and served six million passengers per year. The opening of the harbour bridge immediately rendered the bulk of these ferries redundant and, in 1935, small ferries operated by Hegarty Ferries took over the former runs of the larger craft of Sydney Ferries Limited to McMahons Point. The tram service was replaced by buses in 1933.

In July 1890, the boroughs of St Leonards, East St Leonards and Victoria (incorporating McMahons Point) merged to form the borough of North Sydney. Foreshores were popular for boat building and other maritime activity through the latter half of the nineteenth century and well into the twentieth. In 1957, much of McMahons Point was to be rezoned as 'waterfront industrial' by North Sydney Council, but a group formed by residents and architects, led by Harry Seidler, argued for a residential vision. Seidler proposed a 29-building apartment development in gardens. This redevelopment was in turn opposed by a new council and residents; only two towers were built - Blues Point Tower [1] and Harbour Master.

A stretch of railway line dating from 1893 runs through the suburb's north-west and emerges from a tunnel at an off-peak storage depot in Lavender Bay. It no longer carries passengers as a newer line (known now as the North Shore railway line) was constructed in 1932 which traverses the North Sydney and Milsons Point stations. 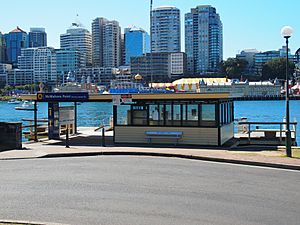 The suburb is served by a ferry for harbour ferry services, the railway (from Waverton, North Sydney and Milson's Point) on the North Shore, Northern & Western Line of the Sydney Trains network, and buses, with one local route (265) terminating at McMahons Point ferry wharf and various other routes passing across the top of it at North Sydney Station and Victoria Cross.

All content from Kiddle encyclopedia articles (including the article images and facts) can be freely used under Attribution-ShareAlike license, unless stated otherwise. Cite this article:
McMahons Point Facts for Kids. Kiddle Encyclopedia.