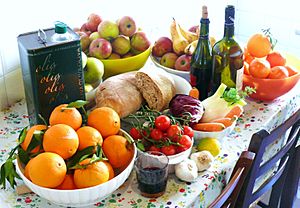 A scientists named Ancel Keys started studying the Mediterranean diet in the 1950s. He saw that people in poor Italian villages were healthier than people in New York.

The diet is based on what peasants, people who worked on farms, in countries around the Mediterranean Sea would eat during the Middle Ages and later, for example, Italian farm workers. They ate a lot of olive oil, beans, and whichever fresh vegetables were growing at that time of year. Meat was expensive, so it was not the main part of the meal. The Mediterranean diet does have foods from North and South America, for example tomatoes.

Professional diet scientists and experts say that the Mediterranean diet can be expensive. A tomato does not cost much money to someone who lives next to a tomato farm and is buying it when it is ripe. It costs more when it is put on an airplane and flown to the middle of a North American city and stored until winter. Other studies show that a Mediterranean diet is not much more expensive than a North American diet.

All content from Kiddle encyclopedia articles (including the article images and facts) can be freely used under Attribution-ShareAlike license, unless stated otherwise. Cite this article:
Mediterranean diet Facts for Kids. Kiddle Encyclopedia.