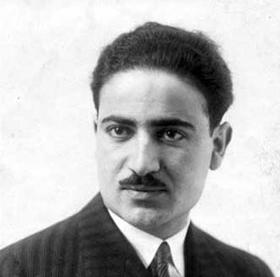 Mehdi Bazargan (Persian: مهدی بازرگان; September, 1907 in Bazargan - January 20, 1995) or Mahdi Bazargan was an Iranian scholar. He protested against the Shah regime in Iran. He was jailed many times for political reasons. Bazargan was Iran's first prime minister after the Iranian Revolution in 1979. He was against the United States Embassy hostage taking. He was also against the continuation of Iran-Iraq war. He resigned on November 4, 1981. Bazargan died of a heart attack on January 20, 1995 when he was travelling from Tehran to Zürich, Switzerland.

All content from Kiddle encyclopedia articles (including the article images and facts) can be freely used under Attribution-ShareAlike license, unless stated otherwise. Cite this article:
Mehdi Bazargan Facts for Kids. Kiddle Encyclopedia.