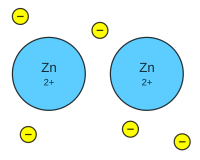 A metallic bond is the sharing of many detached electrons between many positive ions, where the electrons act as a "glue" giving the substance a definite structure. It is unlike covalent or ionic bonding. Metals have low ionization energy. Therefore, the valence electrons can be delocalized throughout the metals. Delocalized electrons are not associated with a particular nucleus of a metal, instead, they are free to move throughout the whole crystalline structure forming a "sea" of electrons.

The electrons and the positive ions in the metal have a strong attractive force between them. Therefore, metals often have a high melting or boiling points. The principle is similar to that of ionic bonds.

Metallic bonds causes many of the traits of metals, such as strength, malleability, ductility, luster, conduction of heat and electricity.

Because the electrons move freely, the metal has some electrical conductivity. It allows the energy to pass quickly through the electrons, generating an electric current. Metals conduct heat for the same reason: the free electrons can transfer the energy at a faster rate than other substances with electrons that are fixed into position. There also are few non-metals which conduct electricity: graphite (because, like metals, it has free electrons), and ionic compounds that are molten or dissolved in water, which have free moving ions.

Metal bonds have at least one valence electron which they do not share with neighboring atoms, and they do not lose electrons to form ions. Instead, the outer energy levels (atomic orbitals) of the metal atoms overlap. They are similar to covalent bonds. Not all metals exhibit metallic bonding. For example, mercury ions (Hg2+
2) form covalent metal-metal bonds.

An alloy is a solution of metals. Most alloys are shiny like pure metals are.

All content from Kiddle encyclopedia articles (including the article images and facts) can be freely used under Attribution-ShareAlike license, unless stated otherwise. Cite this article:
Metallic bond Facts for Kids. Kiddle Encyclopedia.