Brigadier General Michael Joseph Lenihan (May 2, 1865 – August 13, 1958) was a senior officer of the United States Army. He was involved in conflicts in the American Western Frontier, the Philippines, and World War I, where he commanded the 83rd Infantry Brigade during the Meuse-Argonne Offensive while serving on the Western Front.

Born to James Lenihan and Catherine Grainger, Michael Lenihan graduated from the United States Military Academy in 1887, and was appointed first lieutenant in 1894. He was made Captain in 1899 and major in 1911. While stationed on the Hawaiian Islands, he was promoted to Lieutenant‑Colonel. 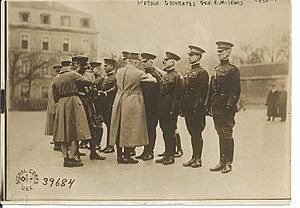 Michael Lenihan (3rd from the right) between generals Lewis and Mitchell at the award ceremony for the Commander, Legion of Honor in January 1919

After the American entry in World War I, Lenihan received a temporary promotion to brigadier general (August 1917). He commanded the 83th Infantry Brigade of the 42nd Infantry Division during the Meuse-Argonne Offensive. The 42nd division was commanded by Charles T. Menoher.

When Lenihans 83rd brigade and Douglas MacArthurs neighboring 84th brigade failed to make progress against heavy German defences, Corpscommander Charles P. Summerall threatened to relief both generals. General William M. Wright describes in his Memoirs that McArthurs troops could approach Hill 288 and Châtillon-sous-les-Côtes using the cover a forest and took the objective, while Lenihans brigade was stopped by enemy resistance before they could take the objectives in the Landres-et-Saint-Georges area, sustaining heavy casualties. Summerall ordered General Menoher to relief Lenihan, which he did on 17 October 1918. Lenihan protested an instited on a hearing. The appointed inspector found no wrongdoing of Lenihan and Major General Hunter Liggett overrode Summeralls decision and made Lenihan commander of the 153th brigade of the 77th Infantry Division.

Lenihan returned to the rank of Colonel after World War 1 in 1919. He was an instructor at the Naval War College, before he became Chief of Staff of the XII Army Corps in 1924. Lenihan was again promoted to brigadier general in 1925. He was awarded an LL.D. title by the College of the Holy Cross in 1925. In the last year of his active army service, he commanded the 3rd Infantry Division from March 1928 to March 1929.

All content from Kiddle encyclopedia articles (including the article images and facts) can be freely used under Attribution-ShareAlike license, unless stated otherwise. Cite this article:
Michael Joseph Lenihan Facts for Kids. Kiddle Encyclopedia.