William Mason Wright (September 24, 1863 – August 16, 1943) was a lieutenant general in the United States Army. He was notable for his service as a division and corps commander during World War I.

The son of a career officer who served as an aide to Winfield Scott and George B. McClellan, Wright initially attracted attention when President Chester A. Arthur nominated him for a second lieutenant's commission despite Wright having failed his exams during his first year as a student at the United States Military Academy, where his roommate was John J. Pershing. Despite the setback, Wright obtained an appointment in the New Jersey National Guard, and served until receiving his Army commission, which was approved in a close vote of the United States Senate; several Senators opposed Arthur's nomination of Wright, arguing that someone who failed at West Point should not receive the same consideration as those who had passed.

Wright embarked on an Army career, and served initially in the western United States. He served for several years as an aide to General John C. Bates, including the Spanish–American War and the Philippine–American War. He later took part in both the Veracruz occupation and Pancho Villa Expedition.

During World War I, Wright commanded several divisions and corps, and took part in combat including the Battle of Saint-Mihiel and the final operations of the Meuse-Argonne Offensive, for which he received the Distinguished Service Medal and other decorations.

After the war, Wright served as Executive Assistant to the Chief of Staff of the United States Army, and acted as Chief of Staff on several occasions. He closed his career by serving as head of the Department of the Philippines from 1922 to 1923.

In retirement, Wright lived in Washington, DC. In 1942, Congress passed legislation that enabled promotions on the Army's retired list for general officers who had been recommended for World War I promotions, but had not received them; Wright was one of two major generals to be promoted to lieutenant general. He died in Washington, DC the following year.

He attended Yale University and was a member of the Delta Psi fraternity. In 1882 he left Yale for the United States Military Academy, where his roommate was John J. Pershing. Wright failed his semiannual exams in December 1882 and left West Point in January 1883, resigning before school authorities took action to dismiss him.

In 1884, Wright joined the New Jersey National Guard, receiving a captain's commission and appointment as aide-de-camp to the commander of the 1st Brigade.

In January, 1885 he was nominated for appointment as a second lieutenant in the 2nd Infantry Regiment. One of the final acts of outgoing President Chester A. Arthur, Wright's controversial commission received nationwide publicity; it was supported by fellow New Jersey resident Frederick T. Frelinghuysen, the U.S. Secretary of State, and opposed by U.S. Secretary of War Robert T. Lincoln, who argued that someone who had not passed the program of instruction at West Point should not receive the same reward as those who had. His commission was narrowly confirmed by the U.S. Senate in February, 29 votes to 22, meaning that he received his commission more than a year before his peers in the West Point Class of 1886 graduated and received theirs.

Wright's initial assignments were with the 2nd Infantry at posts in the western United States, including Fort Spokane, Washington, Fort Omaha, Nebraska, and Fort Coeur d'Alene, Idaho. From 1889 to 1891 he attended the School of Infantry and Cavalry at Fort Leavenworth, Kansas, after which he rejoined his regiment at Fort Omaha. From 1896 to 1898 Wright was professor of military science at the Massachusetts Agricultural College.

Wright served in Cuba during the Spanish–American War. Commissioned as a captain and assistant adjutant general in the U.S. Volunteers, he served in Cuba as aide-de-camp to Major General John C. Bates, commander of the 3rd Division. Wright took part in the Battle of El Caney and the other actions leading to the surrender of Santiago.

In 1899 Wright was promoted to captain in the regular Army. He served in the Philippines during the Philippine–American War, continuing as aide-de-camp to Bates.

In 1913, Wright was promoted to lieutenant colonel and assigned as second in command of the 19th Infantry Regiment. In 1914 he graduated from the School of Field Officers at Fort Leavenworth. During the next two years he took part in both the Veracruz occupation and Pancho Villa Expedition. In July 1916, Wright was promoted to colonel as commander of the 19th Infantry. 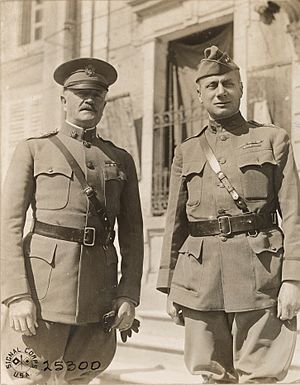 At the start of World War I, Wright was promoted to brigadier general and assigned to command the Hoboken, New Jersey Port of Embarkation.

Wright served in France throughout the war, successively commanding the 35th Division, the III, V, and VII Corps (under the French Eighth Army in the Vosges Mountains), the 89th Division (in the Battle of Saint-Mihiel and the final operations of the Meuse-Argonne Offensive), and I Corps, for which he received the Distinguished Service Medal.

On November 11, 1918, Armistice Day, Wright was in command of the 89th Division and carried out an already planned attack against the town of Stenay only a few hours before the armistice was to take effect. There were 365 casualties, including 61 dead. One rationale for the attack was that he did not want the Germans to occupy the town after the armistice took effect, because Wright intended to make use of the town's bathhouses and other public works, given the amount of time his dirty troops had gone so long without baths or showers. Detractors suggested Wright wanted to capture Stenay because it had cachet as the recent headquarters of Prince Rupprecht, a senior commander of German troops. Another reason offered by Wright in testimony before Congress was that commanders had not been informed how long the armistice would be in effect; several continued with already planned attacks in order to improve their tactical positions, so that they could operate from a position of advantage if hostilities resumed. Yet another rationale was provided by Fox Conner; in his Congressional testimony, Conner indicated that at the time of the armistice, severe bad weather was expected; since Stenay was one of the few towns in the area with large buildings still standing, Conner and other American Expeditionary Forces headquarters staff wanted to occupy the town so the buildings could be used for quartering troops. In addition, those who questioned Wright's decision to carry out the 89th Division's attack pointed to a rivalry with Henry Tureman Allen, commander of the adjacent 90th Division, who also attempted to capture Stenay. When it became clear that Wright and other senior commanders had ordered assaults with full knowledge that the Armistice would go into effect imminently, Allied soldiers and civilians became outraged; there was controversy, but commanders, including Wright, were never punished or reprimanded.

During World War I Wright kept a journal, which was later published as Meuse-Argonne Diary: A Division Commander in World War I.

Wright's photo appeared on the cover of the April 1, 1922 edition of the American Chamber of Commerce Journal, published by the ACC of the Philippines.

Following the war, General Wright served as Executive Assistant to Peyton C. March, the Chief of Staff of the United States Army, and acting Army Chief of Staff. He then commanded IX Corps Area. In 1922, he was assigned to command the Department of the Philippines, and he retired in 1923.

In retirement he resided in Washington, D.C.

In 1942, the U.S. Congress passed legislation allowing retired Army generals to be advanced one rank on the retired list or posthumously if they had been recommended in writing during World War I for a promotion which they did not receive, and if they had received the Medal of Honor, the Distinguished Service Cross or the Distinguished Service Medal. Wright and James G. Harbord were promoted to lieutenant general on July 9, 1942.

Wright was a highly regarded trainer of soldiers and combat leader. In his memoirs, Pershing indicated that Wright left West Point only because he had difficulty passing geometry, and that his classmates approved of Wright obtaining his commission through an alternate route, even though he received his before they received theirs. Pershing also commended Wright's leadership during World War I, as did former Army Chief of Staff Leonard Wood and senior British commander Field Marshal Douglas Haig.

In June 1891, Wright married Marjorie Jerauld. They were the parents of: Colonel William Mason Wright, Jr. (1893–1977), who served in France during World War I, in the China Burma India Theater during World War II, and commanded the Armed Forces Education and Information Service and the Armed Forces Radio Service during and after World War II; Admiral and U.S. Ambassador to the Republic of China (Taiwan) Jerauld Wright (1898–1995); and Marjorie Wright (1900-1985), who married David McK. Key, and worked for the United States Department of State as a cultural affairs assistant and in other positions.

All content from Kiddle encyclopedia articles (including the article images and facts) can be freely used under Attribution-ShareAlike license, unless stated otherwise. Cite this article:
William M. Wright Facts for Kids. Kiddle Encyclopedia.