The son of a Civil War veteran, Menoher was born in Johnstown, Pennsylvania in 1862 and graduated from the United States Military Academy at West Point, New York in 1886 with a commission as an artillery officer.

Menoher served in Cuba and the Philippines during the Spanish–American War. He later graduated from the Army War College and was selected for the original General Staff Corps, where he served from 1903 to 1907. He was commander of the 5th Field Artillery Regiment from 1916 to 1917. 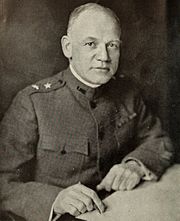 On December 19, 1917, Major General Menoher, who had been a classmate of General John J. Pershing at West Point and was an experienced officer of the field artillery, assumed command of the 42nd Division, Rainbow Division, in France during World War I. Menoher participated in the Champagne-Marne offensive and in the successful Allied offensives of Saint Mihiel and Meuse-Argonne. Menoher was succeeded by General Douglas MacArthur in this position. At war's end, Menoher commanded the VI Corps (United States) and received the Distinguished Service Medal, along with foreign awards from France, Belgium, and Italy.

Following World War I, Menoher became first Director and then Chief of Air Service, where he began a famous (and ultimately losing) conflict with his Assistant Chief, Brigadier General Billy Mitchell. He was promoted to major general in March 1921. Requesting an assignment with troops, Menoher then took command of the Hawaiian Division in 1922 before taking over the entire Hawaiian Department. After this, he commanded the IX Corps Area in San Francisco until his mandatory retirement on March 20, 1926.

He married Nannie Pearson. They had four sons: Charles, Pearson, Darrow, and William. His three youngest sons all graduated from West Point, and served in the Army during World War II. Pearson (1892–1958), a classmate of Dwight D. Eisenhower, reached the rank of Major General during the Korean War.

Menoher died on August 11, 1930. He was buried at Arlington National Cemetery, in Arlington, Virginia.

Menoher Boulevard, a major road in Johnstown, Pennsylvania, and Menoher Drive on Joint Base Andrews, Maryland, are named after him.

All content from Kiddle encyclopedia articles (including the article images and facts) can be freely used under Attribution-ShareAlike license, unless stated otherwise. Cite this article:
Charles T. Menoher Facts for Kids. Kiddle Encyclopedia.