Microbiotheria are a small order of marsupial mammals with only one living species, the Monito del Monte (Spanish for 'little mountain monkey').

It is the only New World representative of the superorder Australidelphia; all other New World marsupials are part of the Ameridelphia.

The species is nocturnal and arboreal, and lives in thickets of Chilean bamboo in the temperate rain forests of the southern Andes. It eats mainly insects and other small invertebrates, supplemented with fruit. 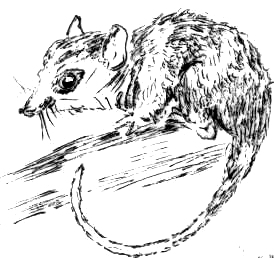 An artistic rendering of the Monito del Monte

It has long been suspected that South American marsupials were ancestral to those of Australia. The two continents were connected via Antarctica in the early Cainozoic era.

Australia’s earliest known marsupial is Djarthia, a primitive mouse-like animal that lived about 55 million years ago. Djarthia had been identified as the earliest known australidelphian, and this research suggested that the Monito del Monte was the last of a clade which included Djarthia.

In 2010, analysis of retrotransposon insertion sites in the nuclear DNA of marsupials confirmed the placement of the Monito del Monte in Australidelphia. It also showed its position as the most basal of that superorder.

The study also confirmed that the most basal of all marsupial orders are the other two South American lineages (Didelphimorphia and Paucituberculata, with the former probably branching first). This indicates that Australidelphia arose in South America (with the ancestors of all other living marsupials), and probably reached Australia in a single dispersal event after Microbiotheria split off (originated).

All content from Kiddle encyclopedia articles (including the article images and facts) can be freely used under Attribution-ShareAlike license, unless stated otherwise. Cite this article:
Microbiotheria Facts for Kids. Kiddle Encyclopedia.