Kids Encyclopedia Facts
This page is about the island in Recherche Archipelago, Western Australia. For other islands, see Middle Island.

Middle Island (French: Île du Milieu) is an island off the south coast of Western Australia in the Recherche Archipelago.

The island is 6.5 kilometres (4 mi) in length occupies an area of 1,080 hectares (2,669 acres) and approximately 9 kilometres (6 mi) off shore from Cape Arid. The island is the largest in the Recherche Archipelago.Goose Island rides adjacent.

It was named by D'Entrecasteaux. Matthew Flinders visited in January 1802 and climbed the 185 metres (607 ft) peak (subsequently named Flinders Peak) to survey the surrounding islands.
The island contains a pink lake, Lake Hillier, from which John Thistle, the Investigator's Master, collected some salt samples.

Philip Parker King anchored off the island in 1818 and lost two anchors that were later recovered in 1973. Sealers operated from the island throughout the 1800s. Bay whaling operations were conducted here in the 1870s and, possibly, as early as the 1840s.

The pirate Black Jack Anderson based himself on Middle Island in the 1820s and 1830s to launch raids on vessels making their way between Adelaide and Albany.

In 1889, Edward Andrews investigated the commercial possibilities of producing salt from Lake Hillier, and briefly moved onto the island with both of his sons. They left after working the salt deposits for about one year.

The island supports a population of the tammar wallaby and the bush rat. 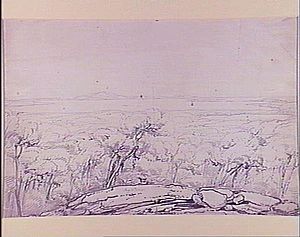 All content from Kiddle encyclopedia articles (including the article images and facts) can be freely used under Attribution-ShareAlike license, unless stated otherwise. Cite this article:
Middle Island (Western Australia) Facts for Kids. Kiddle Encyclopedia.