The Middlebrook encampment was a seasonal encampment of the Continental Army during the American War for Independence near Middle Brook in Bridgewater Township, New Jersey (between Martinsville and Bound Brook) in 1777 and again in 1778–79. The site includes part of the ridge of the First Watchung Mountain. Its position provided a natural fortress not only protecting the Continental Army but also overlooking the plains towards New Brunswick, where the British forces were stationed in 1777. The strategic strength of the position contributed ultimately to the success of the Continental Army by lengthening the war and wearying the British forces.

A portion of the encampment site, known as the Washington Camp Ground, was added to the National Register of Historic Places on July 3, 1975. 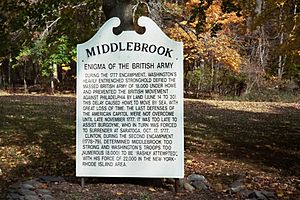 Enigma of the British Army

During the winter of 1776–77, Washington rested the Continental Army initially at the encampment near Morristown, New Jersey. After his outpost garrison at Bound Brook was surprised and routed during the Battle of Bound Brook in April 1777, Washington moved the encampment closer to Bound Brook to the Middlebrook encampment on May 28 and stayed there until July 2. A total of 8,298 soldiers were housed in the encampment, but 2,660 of them were sick or disabled, unable to fight. In contrast, the British maintained a force of about 17,000 near New Brunswick, New Jersey. From the heights of the Watchung mountains, Washington could monitor and counteract British movements. When General Howe decided to move against Philadelphia, concern over the threat by the Continental Army made him choose the safer sea route instead of the faster land route. This led to a significant delay in operations for the British and disrupted plans to help General Burgoyne in northern New York. On June 30, Howe moved his troops to Staten Island in preparation for his Philadelphia campaign, and two days later Washington left Middlebrook and moved the army to Pompton Plains.

It is largely conceded that it was at the Middlebrook encampment that the first official flag of the United States was unfurled, after a law to adopt a national flag had been passed by Congress on June 14, 1777. This event is commemorated annually since 1889 on July 4 with a changing of the flag, a reading of the Declaration of Independence, and the delivery of an historical address at the Washington Camp Ground. Also, by special order of Congress, a Thirteen Star Flag is flown 24 hours a day at the Washington Camp Ground. 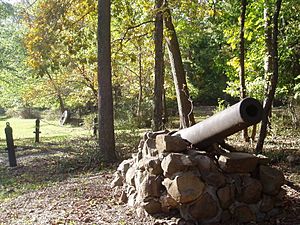 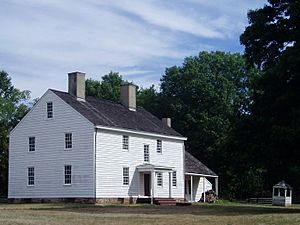 Washington used the Middlebrook grounds again in the Winter of 1778–9. He brought about 8–10,000 troops to the camp site by November 30, 1778. Soldiers constructed cabins from logs covered with clay similar as they had done at Morristown. Washington himself rented the Wallace House (now converted to a museum) in Somerville for four months and paid Wallace $1,000. General von Steuben lived at the Staats House in South Bound Brook. General Henry Knox lived at the Jacobus Vanderveer House near Pluckemin with the Continental Artillery camped at the Pluckemin Continental Artillery Cantonment Site. The main body of the much larger British army was at New York. The camp was closed on June 3, 1779 when Washington led his army to Highlands, New York.

The Washington Camp Ground, on Middlebrook Road in Bridgewater Township, just north of Route 22, was deemed a historic site by local citizens in 1889, and entered the National Register of Historic Places July 3, 1975. The site is owned and preserved by the Washington Camp Ground Association, which also organizes the annual July 4 program at the site. The program includes a public reading of the complete Declaration of Independence, which has been read at the site each July 4 for about 120 years.

Various other sites related to the encampment, in Bridgewater and surrounding towns, are accessible to the public. These include Washington Rock State Park, an observation site on top of the Watchung mountain ridge, in Green Brook, Washington Valley Park in Bridgewater (nearby, but separate from, the Washington Camp Ground), the Wallace House in Somerville, and the Staats House in South Bound Brook. A sign commemorating the encampment also stands in a now-developed area, at the corner of Chimney Rock and Gilbride Roads in Bridgewater.

All content from Kiddle encyclopedia articles (including the article images and facts) can be freely used under Attribution-ShareAlike license, unless stated otherwise. Cite this article:
Middlebrook encampment Facts for Kids. Kiddle Encyclopedia.