Midway is a city in Liberty County, Georgia, United States. It is a part of the Hinesville-Fort Stewart metropolitan statistical area. The population was 2,121 as of the 2010 census, up from 1,100 at the 2000 census.

Midway has several museums, including the Midway Museum and Cemetery and the Dorchester Academy Museum. The Midway Historic District is listed on the National Register of Historic Places. 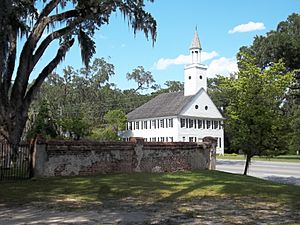 Midway's history dates back to the 18th century. Puritans migrated to St. John's Parish, Georgia from Dorchester, South Carolina in 1752 and established several settlements including what was later to become the Midway community. In 1752 the Council of Georgia granted the settlers 31,950 acres (129.3 km2), as colonial officials wanted a large number of settlers in the area to protect them from the Creek Indians. The original settlers were primarily rice planters and the Midway settlers developed a strong agricultural economy aided by the 1,500 slaves they brought from South Carolina.

The settlers in the area took an early stand for independence. In May 1775, Lyman Hall (a Midway Church member) was sent to the Continental Congress as a delegate from the parish of St. John. A year later Hall and St. John's Parish resident Button Gwinnett (along with George Walton of Augusta) signed the Declaration of Independence. Another Midway resident, Nathan Brownson, served in the Continental Congress from 1776 to 1778, but did not sign the Declaration.

Established in 1752, the Midway Congregational Church building was destroyed during the American Revolutionary War by the British, but it was rebuilt. The present building was completed in 1792.

in 1973, the Midway Historic District, encompassing the Midway Congregational Church and Cemetery, the Midway Museum and the Old Sunbury Road, was added to the National Register of Historic Places.

The City of Midway was Incorporated in 1925.

The Midway Museum is home to documents, exhibits, and furnishings associated with the Midway Society from the Colonial period through its last meeting in December 1865. The Midway Museum was Georgia's first colonial museum.

In July 2011 Midway received national attention after city police shut down a lemonade stand run by young girls attempting to earn money for a waterpark trip. Police and city officials maintained the girls were required to obtain a business license. Neighboring Richmond Hill allowed the girls to set up their lemonade stand at its first farmer's market later that month.

The 2014 award-winning Independent film, A Promise, was filmed in Liberty County.

Public education is provided by the Liberty County School System. Public schools located in Midway are:

All content from Kiddle encyclopedia articles (including the article images and facts) can be freely used under Attribution-ShareAlike license, unless stated otherwise. Cite this article:
Midway, Georgia Facts for Kids. Kiddle Encyclopedia.