Grabovski was born in Potsdam, East Germany, where his father, Yury, worked in construction for the Soviet military. The family returned to their native Belarus (then a Soviet Socialist Republic) when he was three years old.

Grabovski was drafted by the Montreal Canadiens 150th overall in the 2004 NHL Entry Draft and played his first NHL game with Montreal on 6 January 2007 against the New York Rangers. He played three games in the NHL before being sent back down to Montreal's American Hockey League (AHL) affiliate, the Hamilton Bulldogs. He helped them win the Calder Cup as AHL champions in the 2006–07 season. Grabovski was called up to play in a few games with the Canadiens during the 2007–08 season but did not see much playing time due to his low position on the team's depth chart. Grabovski recorded his first NHL assist on 20 October 2007, against the Buffalo Sabres and his first goal two days later against the Boston Bruins.

On 25 September 2012, due to the 2012–13 NHL lockout that cancelled the first three months of the 2012–13 NHL season, Grabovski signed with CSKA Moscow of the Kontinental Hockey League (KHL). When NHL play returned, following a 2012–13 season in which he recorded only 9 goals and 16 points in 48 games, on 4 July 2013, Grabovski was unexpectedly placed on waivers and listed to be bought-out by the Maple Leafs.

On 23 August 2013, as a free agent following his buy-out, Grabovski signed a one-year, $3 million contract with the Washington Capitals. In his first regular season game with the Capitals on 1 October 2013, Grabovski scored a hat-trick in a 6–4 loss to the Chicago Blackhawks. Grabovski completed the 2013–14 season with a respectable 35 points in 58 games as the Capitals failed to reach the Stanley Cup playoffs for the first time in seven seasons. 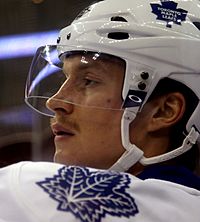 Grabovski with the Toronto Maple Leafs in November 2011

On 2 July 2014, as a free agent, Grabovski signed a four-year, $20 million contract with the New York Islanders. His tenure with the Islanders was largely affected by injury, with a lingering concussion ruling him out for the entirety of the 2016–17 season. Grabovski joined the Islanders along with his Maple Leafs linemate and friend Nikolay Kulemin, making it known to teams during free agency that they wanted to sign together.

In June 2019, Grabovski announced his retirement, stating "I decided for myself that staying at home is not the best option. I need to do something. As a player I can no longer participate in games, so I want to try myself as a coach."

On June 15, 2019, Grabovski was announced as an assistant coach with HC Dinamo Minsk of the KHL.

All content from Kiddle encyclopedia articles (including the article images and facts) can be freely used under Attribution-ShareAlike license, unless stated otherwise. Cite this article:
Mikhail Grabovski Facts for Kids. Kiddle Encyclopedia.