The Chicago, Milwaukee, St. Paul and Pacific Depot Freight House and Train Shed (commonly referred to as the Milwaukee Road Depot), now officially named The Depot, is a historic railroad depot in downtown Minneapolis, Minnesota, United States. At its peak, the station served 29 trains per day. Following decline, the station was closed and eventually adapted into various other uses.

Originally, the facility's most distinguishing feature, the clock tower, was pinnacled and modeled after the Giralda in Seville, Spain; high winds destroyed the pinnacle in 1941 and the tower has since had a flat top. 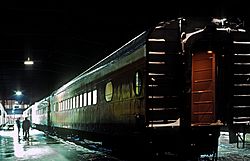 Several cars of the Olympian Hiawatha at the station on January 27, 1968

The freight house served a large percentage of less-than-carload freight arriving and departing from the Minneapolis area. Passenger traffic was also significant. In 1916, 15 passenger trains per day used the depot. Later years included the flagship Hiawathas. Rail yard facilities just south of downtown, on Hiawatha Avenue north of Lake Street, serviced the trains. By 1920, the peak of activity, 29 trains per day used the depot. Into the 1960s, the Chicago, Rock Island and Pacific Railroad (or Rock Island) operated the Twin Star Rocket bound for Houston, via Des Moines and Dallas from the station. 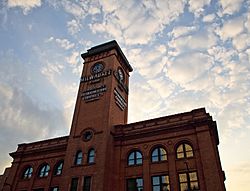 As passenger rail traffic decreased across the nation and freight facilities were consolidated elsewhere, the Minneapolis depot steadily lost traffic. The depot was closed in 1971 and stood vacant for many years as various redevelopment and reuse plans fizzled. In 1978, the depot and freight house were placed on the National Register of Historic Places. In 1980, rail access to the depot was severed when the Milwaukee Road abandoned most of its downtown Minneapolis trackage. In 1998, CSM Corporation began a project to reuse the depot, including a Renaissance Hotel and Residence Inn by Marriott, an indoor water park, and an enclosed outdoor ice skating rink located in the former trainshed. The project was completed in 2001. The water park was converted to additional guest rooms in 2015 during an expansion of the Renaissance Hotel.

Other train depots in the Twin Cities

All content from Kiddle encyclopedia articles (including the article images and facts) can be freely used under Attribution-ShareAlike license, unless stated otherwise. Cite this article:
Minneapolis station (Milwaukee Road) Facts for Kids. Kiddle Encyclopedia.