Miriam Vale is a town and locality in the Gladstone Region, Queensland, Australia. In the 2011 census, Miriam Vale had a population of 422 people.

The town is situated on the Bruce Highway, 464 kilometres (288 mi) north of Brisbane, the state capital, and 170 kilometres (110 mi) south of Rockhampton. 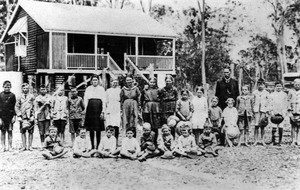 Pupils and teacher outside the Miriam Vale State School, 1918

The timber industry has roots in the late 19th century, with early timber cutters working along the Bobby Range cutting hoop pine. In these early days hoop pine was cut and two timer chutes allowed logs to be shot to the foot of the range where bullock wagons were waiting. Evidence of these old chutes can still be found at the back of Boreelum on the sides of the range. The southern chute was on tram rails and consisted of two carriages. As the log was lowered down the mountain the other empty carriage was drawn to the top. This was achieved by a small overtaking siding in the middle. The other chute to the west was smaller and built out of logs. The timber was in most cases ferried to rail at Lowmead.

There were also many timber mills in the district but many of these closed in the late part of the century. Perhaps the closest mill to town was located on the flat at House Creek.

The dairy industry has the most claim to fame with a massive fig tree near the railway station being the drop off point of "cream cans" full of milk. This depot (being no more than a wooden stage) was the district dairy focal point. Locals would deliver the fresh milk to the depot where it was then loaded onto Claude's Truck for the trip to the Port Curtis Dairy (PCD). Fresh milk wasn't always the delivery and in the 1950s cream was separated on farms and delivered to town. Cream in those days was sold on "degrees of Rancid" (fresh, ripe, stale) as there was no refrigeration. The cream even then was going to the PCD in Gladstone. 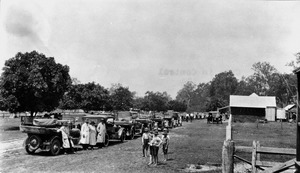 Car rally in the Main Street of Miriam Vale, 1924

A car rally passed through Miriam Vale in 1924; the stretch of road between Miram Vale and Gin Gin was said to the roughest of the rally.

Across House Creek there is also evidence of an old speed way ground (circa 1970s) and if you look around the district you can find history in old horse race tracks.

Miriam Vale has a number of heritage-listed sites, including: 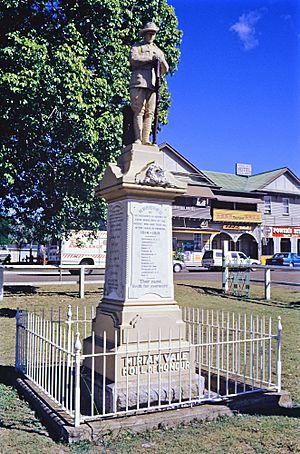 Miriam Vale has a nine-hole golf course with small greens and mature gum trees. At times in its history the course was stretched to twelve holes but the members and district could not sustain the extra work needed to keep these holes open.

The Miriam Vale Library is at 34 Roe Street; it is operated by the Gladstone Regional Council.

There is a Gladstone Regional Council administration centre at 36 Roe Street.

Miram Vale is on the North Coast railway line and is serviced by the Miriam Vale railway station.

All content from Kiddle encyclopedia articles (including the article images and facts) can be freely used under Attribution-ShareAlike license, unless stated otherwise. Cite this article:
Miriam Vale Facts for Kids. Kiddle Encyclopedia.