Mission Nuestra Señora de la Soledad (Spanish: Misión Nuestra Señora de la Soledad), known colloquially as the Soledad Mission or "Our Lady of Solitude" or Mission Soledad, is a Spanish mission located near the present-day town of Soledad, California. The mission was founded by the Franciscan order on October 9, 1791 to convert the Native Americans living in the area to Catholicism. It was the thirteenth of California's Spanish missions, and is named for Mary, Our Lady of Solitude. The town of Soledad is named for the mission.

After the 1835 secularization of the mission and the later sale of building materials, the mission fell into a state of disrepair and soon after was left in ruins. A restoration project began in 1954 and a new chapel was dedicated in 1955. The chapel now functions as a chapel of Our Lady of Solitude, a parish church of the Diocese of Monterey. The priests' residence was later recreated, and functions as a museum. 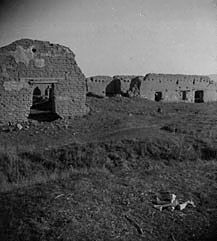 The ruins of Mission Nuestra Señora de la Soledad circa 1900.

The Chalon, a subgroup of the Ohlone were converted and resided there, followed by Esselen and Yokut people. By 1803, there were 627 Mission Indians at Mission Soledad. At the Mission many Chalon married local Esselen speakers, while others married Yokuts were brought into the mission between 1806 and 1834.

The mission was inundated by floods in 1824, 1828, and 1832, and following secularization (when Pio Pico sold the mission for a reported $800), the remaining buildings were looted for supplies.

In 1954, when the Mission Soledad restoration was begun, only piles of adobe dirt and a few wall sections from the cuadrángulo (quadrangle) remained. The chapel was reconstructed and dedicated under the auspices of the Native Daughters of the Golden West on October 9, 1955. The ruins of the quadrangle, cemetery, and some of the outer rooms, while not restored, can still be seen. Governor Arrillaga's grave was identified and given a new marker.

All content from Kiddle encyclopedia articles (including the article images and facts) can be freely used under Attribution-ShareAlike license, unless stated otherwise. Cite this article:
Mission Nuestra Señora de la Soledad Facts for Kids. Kiddle Encyclopedia.