The town is located near the Spanish mission, Mission Nuestra Señora de la Soledad (the mission of Our Lady of Solitude), founded October 9, 1791 by Fermín Francisco de Lasuén, the 13th of 21 missions in California. The town's name comes from the mission.

Soledad is seated at the heart of one of the most economically productive and technologically advanced agricultural regions in the world; hence, the Salinas Valley name, "Salad Bowl of the World". Agricultural companies working out of this region include: Dole Fresh Vegetables, Tanimura & Antle Fresh Foods, Taylor Farms, D'Arrigo Bros. Inc and Mann Packing Inc.

Soledad is located in one of the primary wine grape growing regions of California with over twenty vineyards and wineries within a thirty-mile radius, several of which have tasting rooms and offer a wide selection of wines for sale. Some of the vineyards and wineries located nearby are Chalone, Scheid, Paraiso Vineyards, Pisoni Vineyards, Hahn Estate, San Saba, J.Lohr, Kendall-Jackson, Ventana, Hess Select, Estancia, The Michaud Vineyard, and Graff Family Vineyards.

The original community of Soledad was founded as a Spanish mission October 9, 1791 by Fermín Lasuén, and founded under the rule of the Viceroyalty of New Spain (Virreinato de Nueva España) 1535 to 1821. "Soledad" is a religious reference to the Virgin in the Catholic religion.

The Soledad post office opened in 1869. The current community of Soledad in 1874 had a few buildings and shops. The two main streets were named Front and Main. In 1886, land was subdivided into lots and sold by its owners, the Munras family. In the late 1880s the Southern Pacific Railroad laid rails and began serving the area.

In 1898 Fort Romie was founded a few miles north of the mission and west of the city. San Vicente School was built in 1913 forming the Soledad School District. The City, a general law city, incorporated in March 1921 with a City Council/City Manager form of government. The city's name comes from the mission Mission Nuestra Señora de la Soledad.

Soledad is used as a backdrop in John Steinbeck's 1937 novel Of Mice and Men, an emotional story about two close friends of opposite personalities who must farm others' land to make meager living, and who dream desperately of buying a patch of land to have a farm of their own. One of the most important themes of the novel is tragic loneliness, which is likely one of the reason why Soledad was chosen as the setting, as soledad is Spanish for 'solitude'.

Soledad has been rocked by the great 1906 San Francisco earthquake and the Loma Prieta earthquake in 1989.

The Soledad Prison was three miles (5 km) north of the city until annexed in 1992. It was built in 1946 and currently has an operating budget of $245 million.

The infamous "Nortenos" gang was founded in 1968 along with Nuestra Familia crime syndicate in the Soledad Prison. Most of the members became FBI informants to bring the nuestra familia crime syndicate apart. Due to this the "Norteno" association has been dealt a severe blow to their structure, resulting in the weakening of their units.

On April 28, 2009, a tour bus transporting 34 French tourists flipped over at an overpass on Soledad's north entrance. At least five passengers were killed, one of whom fell over the bridge onto the railroad tracks beneath it.

Soledad's slogan was "It's happening in Soledad" was used until 2013 when "Gateway to the Pinnacles" was introduced.

In July 2015, Ghost Adventures filmed an episode for three days at the infamously haunted Los Coches adobe. The city is hoping it will create national attention and could be made into a tourist destination. The episode aired September 26, 2015.

Soledad is about six miles (10 km) southwest of Pinnacles National Park, nestled among the nearby Gabilan Mountains.

This region experiences warm (but not hot) and dry summers, with no average monthly temperatures above 71.6 °F. According to the Köppen Climate Classification system, Soledad has a warm-summer Mediterranean climate, abbreviated "Csb" on climate maps.

There were 2,472 households out of which 60.2% had children under the age of 18 living with them, 69.9% were married couples living together, 13.8% had a female householder with no husband present, and 9.3% were non-families. 7.2% of all households were made up of individuals and 3.7% had someone living alone who was 65 years of age or older. The average household size was 4.54 and the average family size was 4.58. 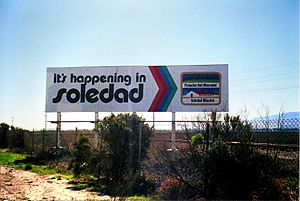 The iconic "It's Happening In Soledad" billboard greets southbound travelers on U.S. Route 101.

Soledad is located on U.S. Route 101 and is accessible via northbound and southbound exit ramps on Front Street, at the north and south ends of town. It is the western terminus of California State Route 146, which connects the city to nearby Pinnacles National Park.

Soledad is serviced by the Monterey-Salinas Transit line 23 (Salinas - King City). As of September 5, 2009, the bus stops in Soledad are located at the correctional facility, Front & San Vicente and Monterey & East.

All content from Kiddle encyclopedia articles (including the article images and facts) can be freely used under Attribution-ShareAlike license, unless stated otherwise. Cite this article:
Soledad, California Facts for Kids. Kiddle Encyclopedia.