The Modell Performing Arts Center (originally The Music Hall and formerly the Lyric Opera House) is a music venue in Baltimore, Maryland, United States, located close to the University of Baltimore law school. The building was modeled after the Concertgebouw concert hall in Amsterdam, and it was inaugurated on 31 October 1894 with a performance by the Boston Symphony Orchestra and Australian opera singer Nellie Melba as the featured soloist. Beginning 1904, it was also used for touring performances by the Metropolitan Opera, and from 1950, it was the home of the Baltimore Opera Company until that company's liquidation in 2009.

The Lyric has been the home of the Lyric Opera Baltimore company since 2011. It was founded after the demise of Baltimore Lyric Opera. 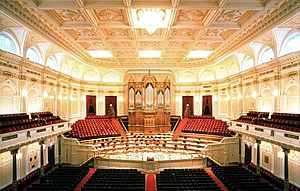 The Grote Zaal (Great Hall) of the Concertgebouw after which the Baltimore Lyric Opera House was modeled.

Opera and music at the Lyric

Having been modeled on the Concertgebouw, the Lyric was primarily used as a concert hall. 1916 saw the founding of the Baltimore Symphony Orchestra which presented performances there until 1982, while the building was purchased from Kahn in 1920 and a significant renovation created an enlarged balcony with seating capacity reaching 2,800. In March 1974, the Lyric's 75th anniversary featured the return of the Boston Symphony Orchestra, and throughout these years, the Philadelphia Orchestra made regular appearances in Baltimore until April 1980. A highlight was the 1934 premiere of Rachmaninoff's Rhapsody on a Theme of Paganini, with the composer at the piano.

Many different kinds of events were presented at the Lyric, including sporting events such as the 1905 lightweight boxing fight between Joe Gans, the lightweight champion, and Mike Sullivan and the 1906 wrestling bout between Gus Schoenlein and the world champion, George Hackenschmidt, the world champion of the time. The first public showing of electric cooking in Baltimore took place, as well as hosting speakers like Aimee Semple McPherson, Will Rogers, Richard Byrd, Clarence Darrow, Amelia Earhart, Charles Lindbergh and William Jennings Bryan.

Performers appearing at the Lyric included in April/May 1984 Yul Brynner who starred in The King and I which over 70,000 people attended in four weeks. That same year, Patti Labelle's performances sold out five performances while, in 1987, Cats played to over 75,000 people.

Major renovations from 1980-1982 completed its transformation into an opera house.

All content from Kiddle encyclopedia articles (including the article images and facts) can be freely used under Attribution-ShareAlike license, unless stated otherwise. Cite this article:
Modell Performing Arts Center Facts for Kids. Kiddle Encyclopedia.