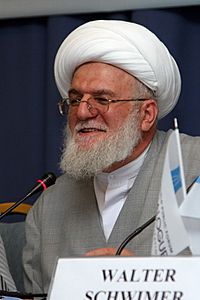 Mohammad-Ali Taskhiri (19 October 1944 – 18 August 2020) was an Iraqi-born Iranian cleric and diplomat. During the 1980s Taskhiri served as the Iranian representative to the Organisation of the Islamic Conference. He was a member of the Assembly of Experts between 1999 to 2007 and again from 2016 until his death. He was born in Najif, Iraq.

All content from Kiddle encyclopedia articles (including the article images and facts) can be freely used under Attribution-ShareAlike license, unless stated otherwise. Cite this article:
Mohammad-Ali Taskhiri Facts for Kids. Kiddle Encyclopedia.