Kids Encyclopedia Facts
"Moishe's" redirects here. For the restaurant in India, see Moshe's. For other Moishe, see Moses (given name). 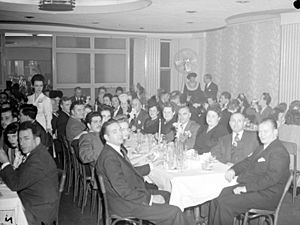 Moishes Steakhouse is one of the oldest and most respected restaurants in Montreal, Quebec, Canada. Founded in 1938 by Moishe Lighter, it was initially called "Romanian Paradise." Legend has it that Lighter, an immigrant from Romania to Canada, became the owner of the restaurant in a card game. The restaurant's name was changed to "Moishe's" at the outset of World War II. The apostrophe was dropped in the 1970s. The restaurant remains a fixture of Montreal and "The Main" neighborhood of Montreal today. The Main and its residents are prominent in Montreal literature and culture, as most famously represented in the writing of Montreal's Mordecai Richler. (Richler himself was a long-time Moishes client, and the restaurant features prominently in much of his work.)

The restaurant has been in its location at 3961 Saint Laurent Boulevard since its founding, in an area that was the historic Jewish quarter. Identified as a "Jewish steakhouse," its menu was based on traditional Old World recipes, and it catered to the mainly Central European immigrant residents of The Main neighbourhood. The influence of Romanian cuisine has had a significant shaping influence on the culinary culture of Montreal, producing, among other staples, the Montreal-style steak spice, bagels and smoked meat for which the city has become known.

The restaurant was founded in 1938 by Moishe Lighter, a Romanian immigrant. In 2018 Moishes was sold to the Sportscene Group. Sportscene also acquired all Moishes trademarks, branding and the line of products sold at grocery stores.

Over the decades, Moishes became a draw for Montrealers of all backgrounds and walks of life. In addition to "regular" Montrealers, it has been frequented by a long list of celebrities, politicians and athletes such as Penélope Cruz, Robert De Niro, Céline Dion, Paul Newman, Sharon Stone, Robert Downey Jr. and Don Rickles. Karol Wojtyla, who would later become Pope John Paul II, ate there while still a Cardinal.

All content from Kiddle encyclopedia articles (including the article images and facts) can be freely used under Attribution-ShareAlike license, unless stated otherwise. Cite this article:
Moishes Steakhouse Facts for Kids. Kiddle Encyclopedia.